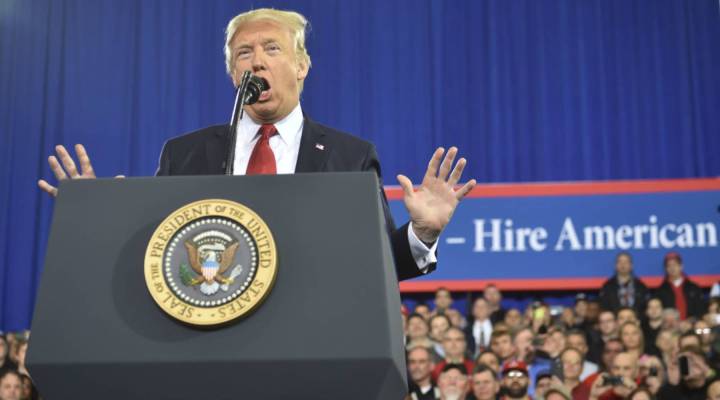 At his Tuesday press conference in New York, during which he discussed the recent violence in Charlottesville, Virginia, President Trump spoke about his theory on how to overcome America’s racial divides. He said, “We have many companies, I say pouring back into the country. I think that’s going to have a huge, positive impact on race relations. You know why? It’s jobs. What people want now, they want jobs. They want great jobs with good pay and, when they have that, you watch how race relations will be.”

Dorothy A. Brown is a scholar in tax policy, race, and class and a professor of law at Emory University School of Law. Marketplace host Kai Ryssdal called her up to get her perspective on what the president said. The following is an edited transcript of their conversation.

Kai Ryssdal: So you heard the president there, do you believe that good jobs are going to fix race relations in this country?

Dorothy A. Brown: Here’s the problem: The research shows us that even when you are a black graduate with a Harvard degree, you are treated not as well as white graduates with a Harvard degree. There is research that talked about the number of employer responses and they found that blacks needed to apply to far more jobs in order to get responses from employers than whites did. So the private sector, employers are not colorblind when they hire. And the study also showed, specifically getting back to the point that Trump made, that the jobs that the black graduates were offered were less prestigious and lower pay.

Brown: Well no, because I don’t think at this point anything that the president would put forward would be well received. When you’re defending neo-Nazis as good people it’s really hard for someone to take any policy proposal seriously or to believe you are implementing them with the goal of assisting race relations.

Ryssdal: So with race-based income and wage inequality in this country being what it is, which is enormous, with the current political environment that we have, in part thanks to Tuesday but certainly it goes beyond that, what policies then could be helpful in that regard?

Brown: So I look a lot at the racial implications of tax policy and one of the things I found is when blacks and whites engage in the same behavior, blacks wind up paying higher taxes than whites. I found it when blacks get married. You can look at it also with respect to homeownership. Tax reform that minimizes or eliminate loopholes, tax reform that would get us back to individual taxation and not have marriage either give us a tax cut or a tax raise would help minimize the racial gap in my view.

Ryssdal: You mentioned homeownership. I mean there is of course the home mortgage interest tax deduction. And when you look at the number of blacks in this country own homes versus the number of whites, right there there’s a great disparity.

Ryssdal: And we should say here, just in terms of actual household wealth and and ability to progress economically in this country, blacks are at a structural disadvantage that there is no amount of single-term president or two-term president is going to be able to fix.

Brown: Absolutely. It took us, you know, over a couple of hundred years to get here. It’s going to take massive investment, massive commitment to even have the conversation but certainly not one term. It didn’t go away in President Obama’s two terms either.