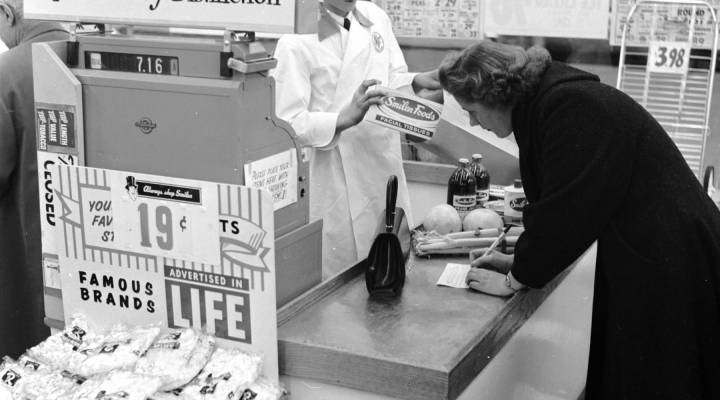 Online payment systems like Venmo and Paypal are benchmarks of the digital era of banking that we’re living in. There’s also Zelle, a new peer-to-peer payment app launched by big banks like J.P. Morgan and Bank of America. So you might expect paper checks to be disappearing, but Americans just won’t let their checkbooks go. In the U.S., people wrote about 38 checks on average in 2015, compared to 18 in Canada, 8 in the U.K., and almost none in Germany. Katie Robertson wrote a piece about Americans’ attachment to checks for Bloomberg. Marketplace’s Kai Ryssdal spoke to her about why Americans are refusing to get with the economic times. Below is an edited transcript of their conversation.

Kai Ryssdal: Who, besides my mom, I guess, is still using checks out there?

Ryssdal: All right so to the headline of this piece: Why can’t Americans not give up their checks? Are we just stubborn and bullheaded?

Robertson: I mean it’s a great question because a lot of people think it’s the world’s biggest economy and they’re kind of stuck in the stone ages whereas other countries have moved on quite a long time ago. If we look at Finland for example they stopped issuing checks back in 1993. So this was a long time ago.

Ryssdal: They just stopped issuing, they just don’t do them anymore?

Robertson: Yeah and there’s other countries in Europe that follow that path. Netherlands in 2002. Poland in 2006. Even Denmark — they stopped issuing checks this year.

Ryssdal: Is there an advantage to using checks? I mean are they safer? I mean do they just make us feel better?

Robertson: I think a lot of it has to do with the comfort, specifically in older generations, there’s a lot of fear, unease around using online banking. You know pressing buttons on Venmo, just, it seems kind of unsafe, you can’t really see your money, it’s online. A lot of people also like to have the check information that’s all written down there on paper. It feels less like it’s going to be hacked.

Ryssdal: Yeah. One of the things you point out in this piece is that we in the States versus almost all the other countries we have a tremendously fractured banking system, we’ve got you know 10,000 depository institutions it’s not like the Fed can just put out an edict that says no more checks.

Robertson: That’s one of the big problems is the highly fragmented banking system. The central bank here, the Federal Reserve, they don’t have the power to mandate a change in payment types, they can’t say we’re turning off checks now, that’s it. The Fed actually they’re quite aware that checks decline isn’t hastening perhaps as quickly as they expected it to. So they actually put together a task force in 2015 to investigate faster payments. They just came out with their report and they want to see a faster payments platform with real time secure payments by 2020. But of course this is a recommendation it’s not something that they can mandate.

Ryssdal: Yeah but it’s also one of those where — and this is going to sound terrible — you have to wait for the check users to age out of this economy if you take my meaning. Right. And for people who are used to who are used to electronic payments and Venmo and all that to become the majority.

Robertson: That’s it. I mean a lot of places I know,1 I talked to several banks and they were basically saying that checks are here for as long as they need to be here. They’re not going away anytime soon.

Ryssdal: What about you when was the last time you wrote a check?

Robertson: I mean, so I was interested in this. I moved to the U.S. nearly three years ago. I’m from Australia, had never written a check and never seen a checkbook. That just wasn’t done, it wasn’t a thing. So I came to the U.S. and was told at my first apartment that I had to get a checking account. I had to physically get a checkbook, which to me was a throwback to the ’80s. And I had to Google how to write a check. I spoke to a lot of ex-pats in the U.S. and they all had similar experiences. It’s just such a throwback.