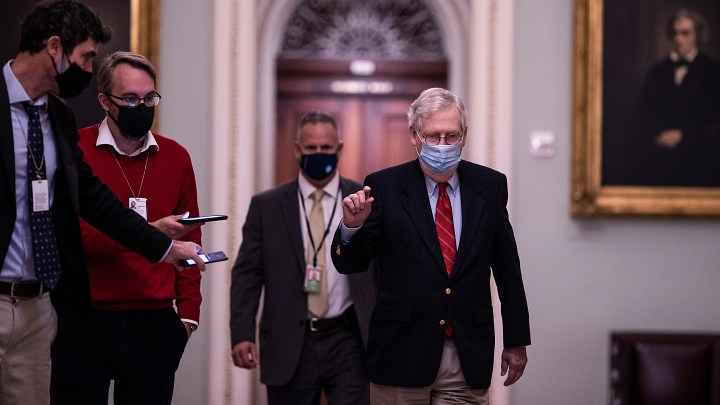 Long-awaited fiscal relief is in sight for many Americans, but the suspense continues.

Senate Majority Leader Mitch McConnell blocked an effort by Democrats Tuesday to raise the amount of the next round of relief checks to $2,000. That leaves the amount, for now, at $600 per person and $1,200 per couple.

Something is better than nothing for folks who’ve been out of work for a while. So how we can expect this round of relief payments to move through the economy compared to the last time?

In the spring, as the pandemic spread and the economy was shut down to stop it, relief checks went out: $1,200 for an individual and $2,400 for a couple. Constantine Yannelis, an economist at University of Chicago, said within the first three months, most of the money stayed in the bank.

“People spent about a third of their checks,” he said, for two reasons.

First, those who still had their jobs and income didn’t need the money to pay their bills. And with pandemic shutdowns, it was hard to shop and travel the money away.

Meanwhile, Americans who had lost jobs and income tried to stash away whatever relief money they could.

“People had expectations that the crisis would be very long, and their income might be disrupted for a long period of time,” Yannelis said.

This time around, Yannelis thinks that even with vaccination underway, there’s still so much economic uncertainty that most people will try to save some of the money again.

But that may be harder with this second round of checks. Nine months into the pandemic, millions of Americans are still out of work and unemployment benefits are dwindling.

“Lower- and middle-income Americans who really have very little savings have gradually had to eat into their savings, because they don’t have the income to cover their expenses each month,” said John Leer, an economist at Morning Consult.