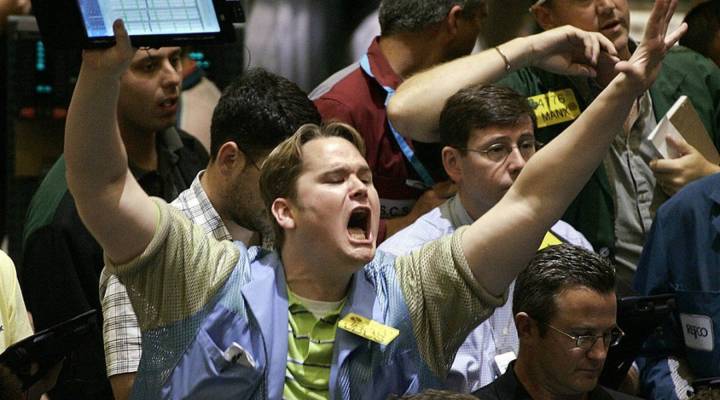 COPY
A trader in the crude oil options pit yells out during trading at the New York Mercantile Exchange. TIMOTHY A. CLARY/AFP/Getty Images

A trader in the crude oil options pit yells out during trading at the New York Mercantile Exchange. TIMOTHY A. CLARY/AFP/Getty Images
Listen Now

When you think of the trading floors at the New York Stock Exchange or the Chicago Board Options Exchange you might picture traders shouting and throwing hand signals.

It’s known as “open outcry,” and in the last few decades, it’s steadily declined as electronic trading has taken over.

Now a company called Box Options Exchange is planning a bit of a throwback by opening up a new trading pit with about 40 human traders.

Wall Street Journal reporter Gunjan Banerji joined us to talk about why Box Options Exchange’s rivals have been protesting the move and why an exchange would want an open outcry floor. Below is an edited transcript.

Amy Scott: So I covered Wall Street for a long time and did my share of stories about the decline of open outcry as electronic trading came in. Why open a new open outcry pit now?

Gunjan Banerji: You know, that’s what a lot of people are wondering. Box Options Exchange, which has just around 2 percent of options’ market share, wants to launch a new open-outcry floor at the Chicago Board of Trade Building. And it’s stirred some controversy in the derivatives market. A number of exchanges —some of its rivals and trading firms — have filed critical letters about the plan. Box is arguing that the SEC does not limit the number of open-outcry floors or the number of exchanges out there. So, why not allow another exchange to launch an open-outcry floor?

Scott: You write that in the options market, open outcry is still about 13 percent of the market. Why has it held up in options trading as the number of floor traders has declined in other markets?

Banerji: It’s kind of surprising. There are four options’ open-outcry floors, and for the New York Stock Exchange, 25 to 40 percent of their options volume flows through those open-outcry floors. Traders tell me that’s because options can just be so complicated and involve different strategies. and it’s easier for a human trader on the floor to kind of work that out with other traders than for it to go through electronically.

Scott: So sometimes a shouting human is more effective than a computer.

Banerji: It kind of seems like an anachronism, because as you said, floor trading has really deteriorated as more and more contracts in other industries are traded electronically. And many floor traders over the past few years have had to find new jobs. The days of thousands of people crowded into floor pits shouting and making hand signals to execute trades has largely passed. And even for the Chicago Board Options Exchange, their open outcry floor has thinned to about 440 traders from earlier this year from 10 times that in the late 1980s.

Scott, Well, if this is approved by the August 2 deadline, do you think we could see a resurgence of the floor trader as a career?

Banerji: Some people are actually worried that if this is approved, it will further fragment the industry and weigh down trading firms with more costs to staff another floor, to trade another floor, and they have already been stressed in recent years.