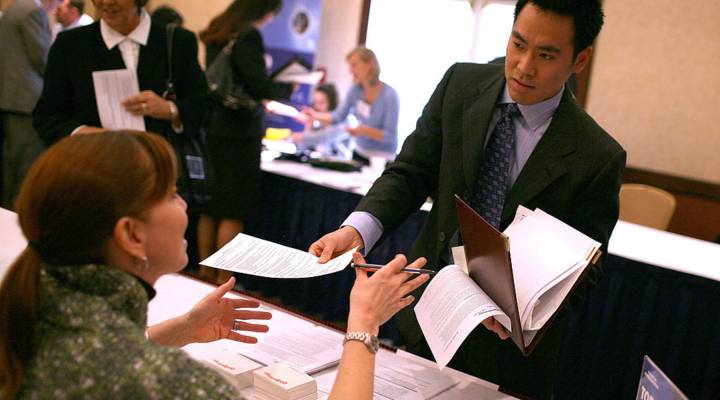 COPY
Job seeker Christopher Tan gives a resume to a potential employer during a job fair on December 17, 2008 in Concord, California. Photo by Justin Sullivan/Getty Images

Looking for a job has never been fun but lately it seems to be getting more complicated. The U.S. is at close to full employment, but companies are getting pickier and less responsive at the same time, as Kristen Shattuck found out recently.

Shattuck got a shock when she started looking for a new job last year. She’s an education consultant and found the process much more involved than the last time she was on the market back in 2011.

Before her interview, organizations asked her to write a personal statement, submit strategic plans, proposals, and watch videos, which she then had to give written feedback on.

“The amount of pre-work I was doing for most of these jobs was six to ten hours of pre-work,” said Shattuck. “And these were for interviews I didn’t even go sit for.”

Instead of meeting Shattuck in person, prospective employers conduced interviews with her over phone or Skype. A couple of times organizations asked her to submit some work she was proud of from a previous job. A particular piece of work came to mind. It was a project she’d led on teacher effectiveness which had taken months to complete, and was a team effort.

“I was asked to produce it and the first time I did, I later found out they were using it in the organization although I never received a call back,” she said.

She said never hearing back was typical, but finding out from a friend at the company that they were using her work was an extra blow.

Journalist Rachel Schallom can relate. She’s a digital editor who was laid off at the end of last year.

During her search she submitted 71 applications, had more than 20 phone interviews, six in-person interviews, and got only one job offer.

“One of the things I noticed through this process was the power hiring managers have to influence small things in people’s lives,” she said. “So the time you lose sleeping if someone didn’t get back to you, or the anxiety you have wondering if you should renew your lease or not.”

Schallom was always waiting. She received rejection notes less than half the time.

Then, after filling out forms, submitting a proposal, and doing several phone interviews, she had an eight-hour day interviewing on the other side of the country. She said her face hurt from smiling.

At the end, the manager asked when she could start.

She flew home and waited.

“I sent a follow-up email because I hadn’t heard from him,” she said. “And then he told me they had decided that I wasn’t the right culture fit.”

So why do job hunters have to go through all this? Allison Hemming runs The Hired Guns, a New York City recruiting firm. Her clients are digital companies.

“They’re looking for more and more out of each individual person that they hire, and this is their way to manage the risk,” she said. “I think some of it can be ridiculous and too long.”

But she added that candidates need to look at it like dating. You wouldn’t want to marry someone after the first date, right? She said these interviewing marathons are a way for companies and candidates to make sure you’re the one. Still, she agrees hiring managers – like some dates – could be better about the let down.

“There’s no clear process sometimes in how to give somebody bad news. It makes people feel uncomfortable. So they don’t do it.”

Hemming urges companies to make sure that candidates who get turned down understand why.

But Schallom said that’s just the problem – getting useful feedback is all but impossible. She used to hire people herself and said that she knows hiring managers have day jobs and often little training. But she said something has to change.

“How you hire is a huge part of your culture,” she said.

And a big recruiting tool – or a turnoff for candidates.