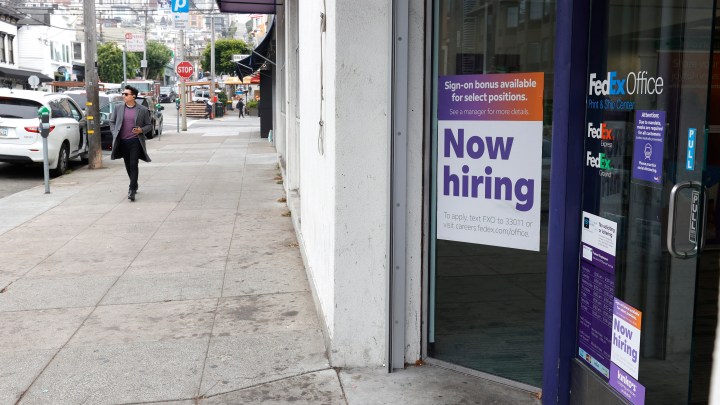 COPY
A "Now Hiring" sign is posted in the window of a San Francisco FedEx store on Sep. 16. Last week was the first week with fewer than 300,000 initial unemployment claims since March 14, 2020. Justin Sullivan via Getty Images
COVID & Unemployment

A "Now Hiring" sign is posted in the window of a San Francisco FedEx store on Sep. 16. Last week was the first week with fewer than 300,000 initial unemployment claims since March 14, 2020. Justin Sullivan via Getty Images
Listen Now

The number of people getting unemployment checks every week, continuing claims, was also down to 2.5 million. Those numbers have been trending down for the past few weeks, after going up for a while in September with the delta surge.

What does that tell us about the job market and the economy, big-picture?

The weekly jobless claims numbers tell us in near-real time — like last week — how many people lost their jobs. At the beginning of the pandemic, that was millions of workers every week. Early this year, it was still 700,000 to 800,000. Now, it’s under 300,000.

“The good news is, new claims have really now tip-toed closer to pre-pandemic levels,” said Mark Hamrick at Bankrate.com. “Fresh job loss — while obviously potentially devastating for individuals and families — is not the key issue for the economy right now.”

What is key is getting unemployed people, and those who’ve left the workforce in the pandemic, back to work. In the last few weeks, more than 150,000 workers have gotten off the unemployment rolls.

The waning delta wave is playing a large role, said Betsey Stevenson at the University of Michigan.

“They’re more comfortable going back to jobs because now there’s a vaccine mandate, or there’s not as many cases in their community. It could be that employers are getting a little bit better with the offers that they’re giving workers,” she said.

“The nexus of power has shifted from employers to workers. And they’re responding to the fact that Target or other companies have been — in the past few years or so — have been raising their wages,” Rodgers said.

Now, keep in mind that first-time weekly jobless claims — new layoffs — are still about 90,000 higher than before the pandemic, and nearly 2 million more workers are collecting weekly unemployment checks.