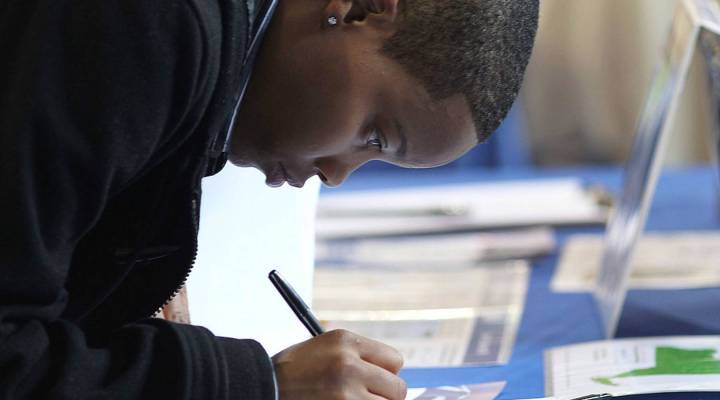 COPY
A teenager fills out an application at a job fair in the Queens borough of New York City. Spencer Platt/Getty Images

A teenager fills out an application at a job fair in the Queens borough of New York City. Spencer Platt/Getty Images
Listen Now

At graduation day for Franklin High, a big urban high school in Portland, Oregon, newly minted graduates milled around in their maroon caps and gowns after the ceremony, hugging friends and posing for family photos.

For 18-year-old Jack Morgan, thoughts were also turning to what comes next this summer: “Work — video, hopefully video production,” said Morgan. He didn’t have a job lined up yet, but was “absolutely confident” he would land one.

The U.S. unemployment rate stands at 4.3 percent, and the tight labor market is giving a bump to young people’s job prospects for the summer. Unemployment among 16- to 19-year-olds fell to 14.3 percent in May — its second-lowest reading since 2006 (it dipped to 13.7 percent in March). Teen unemployment hit a previous low of 12.3 percent in June 2000.

But even as the job situation improves, fewer young people are seeking work than in previous decades. And it is getting harder for teens to find the entry-level retail jobs that used to be a staple of summer employment.

Amy Byers is the mother of an 11th-grader at Franklin; she’s also a hiring manager at a local hotel. Byers’ first job when she was in high school was selling clothing for teens at a local mall. But these days, “people buy on the internet so those shops are becoming obsolete,” she said. “And those jobs are also harder to get, because once those teenagers get them they keep them, versus where before it might just be a summer job.”

“We’ve seen quite a bit of cutting from brick-and-mortar stores across the country,” he said. “Retail is the No. 1 job cutter, and it’s a trend we expect to see in the future.”

“I’m going to work with Portland Public Schools as a teacher’s assistant,” Garcia said. “I want to become a social worker.” She said it wasn’t very hard to land her summer job, “because I got involved with the community a lot.”

Ivonne Garcia, 18, celebrated her graduation from Franklin High School in Portland, Oregon, with family members. Garcia is working as a teacher’s assistant for the public school system this summer and is planning to attend Portland Community College to study social work.

Michael Elliott, also 18, had an internship lined up at the local transit authority and was also going to be coaching a youth football team. Neither position would be paid.

“I just like doing it because I love football,” he said.

Bao Le, 18, was sticking with the shrinking retail sector — work he had already done for several years during high school — in order to earn money to attend Portland State University in the fall.

“I’m going to stay at my convenience store job,” Le said. He’ll make $10.75 an hour. “It’s what a teen can get in this day and age. There are moments when I like customer service, but most of the time it’s hell. People my age, a lot of them just like to study more than they like to work. I have to pay for my own living expense.”

In the 1970s, more than half of 16- to 19-year-olds were working or looking for work (labor-force participation peaked in 1978 at 58.5 percent, according to the Bureau of Labor Statistics). Today that percentage has fallen below 35 percent, in part because more young people are doing unpaid internships and studying during the summer.