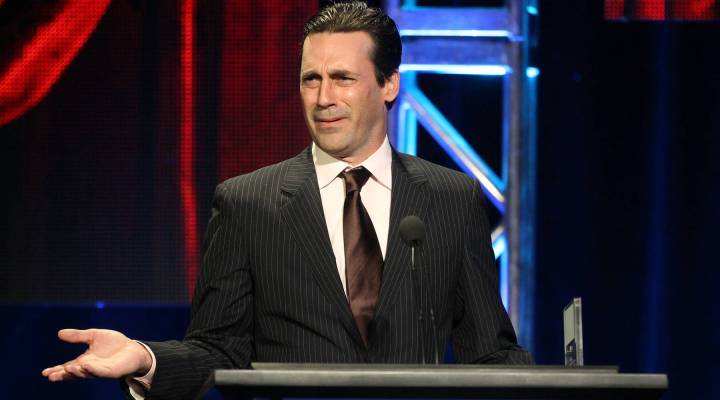 What would Don Draper do? Frederick M. Brown/Getty Images

With recent Pepsi ad blunder and a mass mailer from Adidas congratulating runners who “survived” the Boston Marathon, just what IS the process of getting an ad campaign greenlit for a large company?

Every couple of months there is an ad that has people asking: Who in their right mind approved this? What were they thinking? As a result, a number of companies — not just Pepsi and Adidas — have had to issue public apologies for their ad campaigns in the past.

The Pepsi ad was created by the company’s in-house content creation arm, Creators League Studio. Other companies such as Google and Apple have also relied on in-house teams to create ads in the past. However, a majority of companies still use outside ad agencies for any major advertising.

To find out just how an ad goes from an idea to a finished product, we spoke to Jennifer Cacioppo, executive vice president and business lead for Leo Burnett.

Let’s start with the basics. Inside ad agencies such as Leo Burnett, there are typically three different departments: accounts people, who lead the business strategy; creative people, who come up with the ads; and production people, who make ads into reality.

“It’s a very diverse group of people on our side, and the client group is equally diverse,” Cacioppo said. “We might be working with a chief marketing officer for a big initiative or a vice president of marketing. It could be product development people. I have presented advertising to HR people, to digital experience people. There’s a lot of individuals as clients who are involved in making decisions, too.”

There are different reasons why companies might want to commission an ad  —  to solve problems, launch products or get people to change the way they think about the company. Some companies come into the initial meetings with “reams of paper and information” and some come with nothing.

From the initial meeting, Cacioppo and her team try to distill two main questions: What problem are we trying to solve and where does that intersect with the consumer?

Once the ad agency and the client company decide on what they are solving, the creative team tries to come up with a “platform idea” — the thing that ends up on your TV as an ad, or in your magazine, or in a nearby store as a “consumer experience.”

“There’s a lot of client engagement and collaboration along the way,” Cacioppo said. Some of the collaboration starts with so-called tissue sessions, where the agency would present clients with ideas that are scribbled on pieces of paper or even bits of napkins. “Because we want initial approval or feedback to that idea. We find that that is a very helpful process.”

This way the company does not go down a wrong path and find out that it’s not what the client wants three weeks later when it is finished. Once the client buys into the idea, it “would go through the sausage-making process,” Cacioppo said. This includes production and shooting of the ads, which would again be approved by the client throughout the process.

Rarely does the public get to see the ad before it is finished. In some instances, such as Super Bowl or awards ceremony ads, agencies might use focus groups. That does not, however, mean that ads do not get vetted. All proposed ads also undergo in-house scrutiny before being released to the public.

“When we are looking at work here internally, we have a lot of different perspectives that can come to the table, and we are critical on our own work,” Cacioppo said. “We are very self-critical before it leaves the building.”

So where did the system fail when it comes to ads like Pepsi’s? How come no one said, “No, Kendall Jenner cannot resolve conflict with a can of Pepsi”?

“I feel like there is joint accountability there,” she said, adding that something probably got missed. “They started with a great insight and somewhere it went awry. You wish that somebody in one of those rooms could have raised their hand on that one.”

Leo Burnett is not without blunders of its own. Most recently, McDonald’s pulled an ad created by the company’s United Kingdom arm. The ad, which was criticized as being insensitive, featured a mom telling her son that one of the things he has in common with his deceased father is his preference for Filet-O-Fish.

“It was never our intention to cause any upset. We are particularly sorry that the advert may have disappointed those people who are most important to us — our customers,” McDonald’s said in a statement.

In 2015, another ad created by the U.S. arm of Leo Burnett also drew criticism. The ad, called “Signs,” featured various messages displayed on the golden arches celebrating members in the community as well as marking tragedies such as the Boston marathon and 9/11. While some on the internet called the ad tasteless and insensitive, McDonald’s said it was “happy” with the ad campaign for sparking commentary and allowing McDonald’s to “have a deeper conversation with customers.”

“That ad did a lot of good for McDonald’s, and what it ended up doing was bringing up people who were on the fence about McDonald’s to their defense,” Cacioppo told Marketplace. “Because — say what you will about that spot — the truth is those [signs] were 100 percent true. Those [McDonald’s] owners, operators live in those communities, got through those disasters together with their communities and celebrated those victories.”

Companies do not need to avoid using current events or movements in their ads, but they should be self-aware when doing so, advised Cacioppo.

“The reason I thought of that [‘Signs’ ad] was because there was one with 9/11 and one about the Boston bombing, but there were also ones about enduring through floods and celebrating people in the community,” she explained. “That might be an example on digging into what’s happening in the world but doing so in the way with a self-aware, positive message. Whereas I think the Pepsi one was less self-aware.”

When Pepsi issued its official apology for the ad, the company also apologized “for putting Kendall Jenner in this position.” One of the other questions that has often come up regarding the process of how ads get created is: How much input do the featured celebrities have?

According to Cacioppo, typically the talent would have little to no input.

“For very, very highly paid celebrities, it does enter into the conversation and at various levels. It depends on how many zeroes are in the conversation,” she said, referring to the amount that the stars would get paid. “In general, if celebrities are used, the people who are writing the campaign are trying to keep it in the spirit of what that celebrity might do … but the client is paying the bill.”

But what if the ad misses the mark and the celebrity’s involvement comes under scrutiny? That’s what recently happened to Chloë Grace Moretz, who voiced Snow White in a new movie called “Red Shoes and the Seven Dwarfs.”

How did this get approved by an entire marketing team? Why is it okay to tell young kids being fat = ugly? ??@ChloeGMoretz pic.twitter.com/PVhgwluGTM

The movie was accused of fat-shaming after a billboard ad for the movie asked: “What if Snow White was no longer beautiful and the seven dwarfs not so short?” The ad was illustrated with two version of the Snow White — one tall and thin and the other shorter and heavier. The ad campaign didn’t stop there. A short video teaser for the movie depicts a dwarf tossing Snow White around while he attempts to remove her shoe. In another longer video, dwarves hide under the bed and watch as Snow White removes her clothes and shoes, transforming into the heavier version of herself and eliciting negative reactions from the two men under her bed.

“I have now fully reviewed the marketing for Red Shoes, I am just as appalled and angry as everyone else, this wasn’t approved by me or my team,” Moretz tweeted. “The actual story is powerful for young women and resonated with me. I am sorry for the offense that was beyond my creative control.”

“It’s given a microphone to people,” Cacioppo said. “Before social media, people might have called 1-800 numbers for companies, and there would be a lot of consumer reports buried in the basements of companies.”

Today, that kind of criticism is public.

“It’s on advertisers and on clients to make content that’s considered that this is the world we live in and how we communicate,” she added.