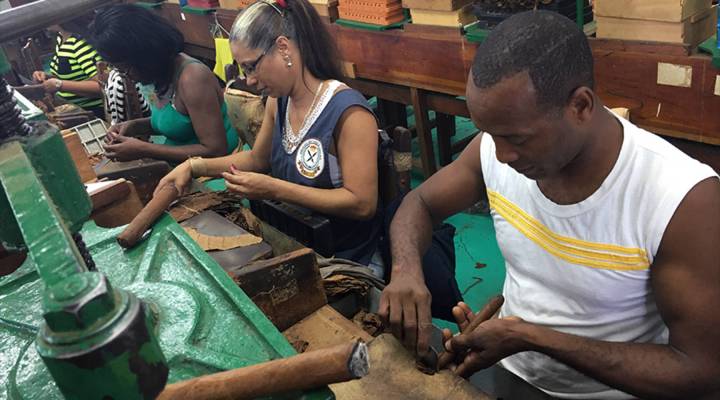 COPY
Workers at a Havana factory meticulously roll tobacco leaves into cigars. Supervisors measure and weigh each cigar to make sure it meets the high standards Cuban cigars are known for. Anurima Bhargava

Workers at a Havana factory meticulously roll tobacco leaves into cigars. Supervisors measure and weigh each cigar to make sure it meets the high standards Cuban cigars are known for. Anurima Bhargava
Listen Now

Last year was a bad year for cigar production in Cuba. That might not worry American cigar smokers too much, as it is still illegal to buy or sell the coveted Cuban cigar in the United States. But the tobacco growing troubles hit Cuban farmers, like Jorge Luis Pérez, hard.

When I met Pérez, he was bent over a frail looking leaf in his huge field of tobacco plants.

“This is is what I know,” Pérez said, gently cradling some green wilty tobacco leaves. He calls himself a “guajiro bruto,” a weather-beaten, rough-edged farmer. His family-owned farm is in Viñales, a tobacco-growing region about two hours from Havana.

“We’re four generations of tobacco farmers, and well, let’s see if our little ones want to continue the tradition of growing tobacco,” Pérez said.

His children probably won’t continue the guajiro bruto tradition because the pay is terrible. Farmers are mandated to sell 90 percent of their tobacco crop to the government for a set price. They can then sell the remaining 10 percent at their own price.

Tobacco farmer Jorge Luis Pérez sits in the thatched-roof hut where he dries the tobacco leaves.

But last year with no rain, and then too much rain, tobacco plants suffered.

“Sowing the tobacco seeds is really hard because we have to often do it without water,” Pérez said. “The drought has made things really chaotic.”

Dimas Castellanos, a Cuban journalist who writes about the economy in Havana, worries that younger Cubans won’t want to be tobacco farmers, especially given what recent bad weather has done to the industry.

“The last two years there have been problems in the tobacco production process, and there were months when Cubans themselves couldn’t buy a cigar,” he said. “Cigars just disappeared from the stores. And that’s how we’re losing a tradition, a culture.”

Cigars have traditionally been important for the Cuban economy, according to Enrique Babot, an executive with Cuban cigar company Habanos speaking at a cigar expo in Havana.

“Cigars is No. 4 in terms of hard currency earner for the Cuban economy,” Babot said.

Remember those large green tobacco leaves from farmer Pérez? Well, the Cuban government bought them from him after he spent months drying them. The leaves are then sent to cigar-making factories where they are rolled, snipped and pressed into the famous Cuban cigars.

On the upper floor of a Havana cigar factory, dozens of men and women sit at tables, rolling and cutting leaves into cigars. One worker, Rafael Borges, has a freshly rolled cigar dangling from his mouth as he rolls, shapes, snips.

“Smoking a cigar is simple,” he said. Workers are allowed to smoke as many as they want while they work, he added. The high-end cigars he makes (and doesn’t smoke) will most likely end up in the humidor of a wealthy foreigner — they’re mostly for export.