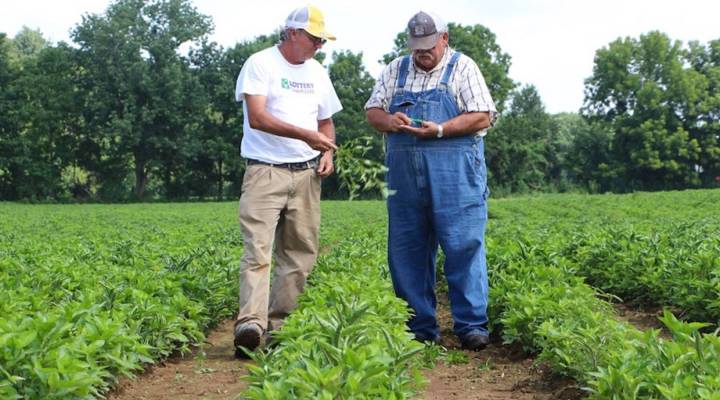 For many farms in Tennessee, tobacco is still the biggest cash crop in the field. It’s been that way for generations. But farmers are looking for alternatives that aren’t quite so difficult to grow, and some are turning to an unusual one — indigo, as in, the plant that can be used to dye blue jeans.

David Fulton farms about a thousand acres in Robertson County, Tennessee, including a small field on the side of a back country road bordered by trees.

The first thing to know about indigo plants is that they are, well, green. They look like bushes growing in long, neat rows.

Indigo plants are green — the blue dye is processed from the plant’s leaves.

“Evidently, it appears to be doing something right,” Fulton said, standing on the edge of the field. “I don’t really know what it’s supposed to look like, but that right there looks pretty good to me.”

This is Fulton’s first year growing indigo, and there’s a lot he doesn’t know — like how do these green plants turn into blue dye? Fulton’s neighbor, Larry Williams, is also growing indigo for the first time, but they don’t agree on the answer.

“I saw a leaf right there somewhere that has some purple in it, some color in it,” Williams said.

“The dye is actually going to come at the bloom that will come off of it,” Fulton said.

“I thought it was the leaf itself,” Williams said.

It turns out, Williams was correct — the dye comes from the leaf.

It’s not that these men are inexperienced. They’re in their 50s, and they’ve worked in these fields for decades. But what they know is tobacco.

Despite all the changes in the tobacco industry, it is still big business here. It has paid for mortgages, and sent kids to college. It’s part of who they are, Williams said.

“I’m the fifth generation on my farm,” he said. “Grandfathers, great-grandfathers raised tobacco.”

But raising tobacco is labor intensive. Every part of the process is done by hand — from the planting to the harvesting and curing. And Williams said the next generation isn’t sticking around to do it.

“The labor doesn’t seem to be out there anymore. None of the young people want to work in tobacco. It’s a nasty job,” he said. “Every bit of it is hot and nasty.”

So even though tobacco is what he knows, he’s been on the lookout for alternatives, things that are easier to grow and can still make some money.

Earlier this year, Williams heard about a new local company called Stony Creek Colors. It developed a method of planting indigo that uses the same equipment as tobacco, so the farmers didn’t need to buy anything new.

Stony Creek also created a machine to harvest the crop, and people from the company come out to the farms and do it themselves. All these farmers have to do is make sure the indigo stays alive through the season.

Indigo won’t make the farmers as much money as tobacco, but it’s so much easier, said Stony Creek founder Sarah Bellos.

“We’re not trying to compete on per-acre price basis with tobacco. We are trying to make the margins for the farmer good for growing indigo,” she said.

Her company is still trying to prove to investors that the business model works. For the last century, almost all indigo dye has been made synthetically — no farming involved.

Bellos wants to bring it back, and she’s convinced that makers and consumers of high-end jeans will pay more for natural indigo. So far, it’s working. A denim manufacturer in North Carolina bought all of Stony Creek’s indigo crop this year.

Indigo is promising, Fulton said, and not just for his farm. Stony Creek is also processing the dye from the crop in a renovated building down the road, which is bringing new jobs to the community.

And that new indigo factory? It used to process tobacco.