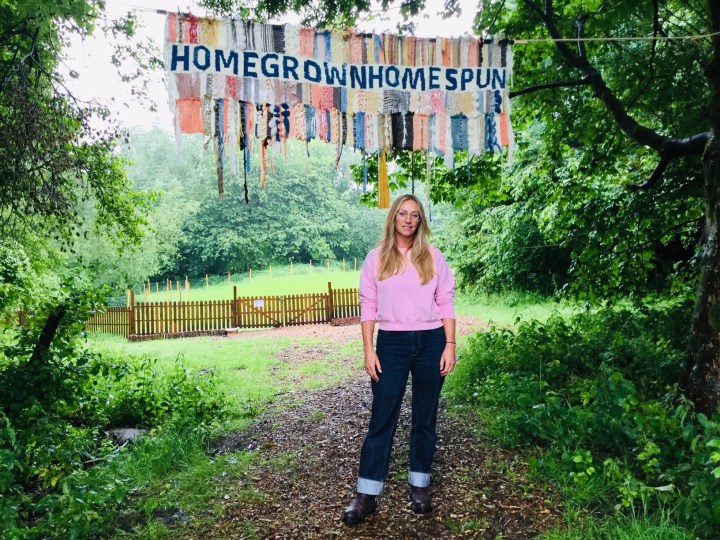 COPY
Justine Aldersey-Williams is one of the organizers of the Homegrown Homespun project. ”We aim to grow our own pair of jeans in Blackburn,” she said. Mimisse Beard

Justine Aldersey-Williams is one of the organizers of the Homegrown Homespun project. ”We aim to grow our own pair of jeans in Blackburn,” she said. Mimisse Beard
Listen Now

Climate change and the COVID-19 pandemic are forcing many industries to cut their carbon footprint and shorten their lengthy and fragile supply chains.

Textile and clothing businesses, in particular, are under pressure. Now, a small pilot project in the northwestern British town of Blackburn offers one low-key way forward.

Blackburn, a former mill town that was once the center of the global textile trade but went into steep decline in the second half of the 20th century, is now hosting a curious little experiment in clothes making. It’s called Homegrown Homespun. The plan is to create a garment entirely from local resources; in the words of the organizers, “to grow our own jeans.”

The project is underway on a small patch of land between a busy road and a canal close to the center of town. Last year this .75 acre plot was derelict, covered in refuse, strewn with burnt mattresses and rusting metal. Today, it’s a neatly fenced field of luxuriant green.

“We’re growing flax for linen and woad for indigo dye with the aim of growing our own pair of jeans in Blackburn,” said Justine Aldersey–Williams, a dye expert, head of North West England Fibreshed and one of the project organizers.

“We don’t need to go off around the world importing materials when we’ve got good natural materials here,” Aldersey-Williams said.

The two plants at the heart of the project have a long history in Britain.

Woad once grew across the country. Ancient Britons daubed their bodies in its blue dye in a vain attempt to scare off the Romans. And, before cotton became the dominant cloth during the Industrial Revolution, flax was grown widely across the United Kingdom, as well.

The linen derived from flax is a natural product, Grant said, unlike most of the fossil fuel-based synthetic fabrics used in today’s clothes. And it’s incredibly hard-wearing, he said.

“Far, far more hard-wearing than cotton. It’s a great fabric for workwear. They used to make sailcloth out of linen. It’s a very durable fabric, so we’re developing a denim-like fabric,” he said.

Grant and his colleagues aim to grow, harvest, spin, weave and dye at least one pair of jeans from their field of flax in time to unveil the garment at the next British Textile Biennial, a series of exhibitions and events in October.

“The current system for producing and distributing clothing is incredibly polluting, environmentally and ethically — not fit for purpose,” he said. “We’re trying to demonstrate that there is another way, that you can make clothes completely locally, that cause no harm to the environment and do it in a way that’s economically sustainable.”

The Homegrown Homespun team hopes that the initiative will eventually lead to the birth of a local community of growers, spinners, weavers and dyers producing high-quality clothing that will not be as cheap as mass-produced fast fashion but will represent better value for money as it will last. And they believe it will prove popular.

“We hope to scale up and maybe move to medium-scale production so we can build a new regenerative textile industry here in Blackburn which, remember, was the home of the Industrial Revolution,” she said.

Patrick Grant took up the theme.

“At one point, over 70% of the world’s cotton textiles were made here,” he said. “The world was once clothed by the mills of this area. So this is a great place to see whether we can reshape this industry and create an economically sustainable model that’s good for local people and good for the planet. “

No one seriously believes that Blackburn will ever fully regain its former textile manufacturing glory. That would be pie in the sky, spinning a yarn, indeed. But the organizers of this experiment believe there could be at least a small niche industry in the making here — an industry that can only grow.