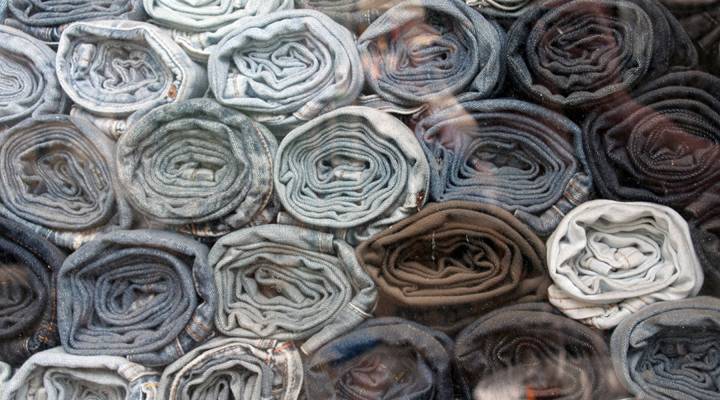 COPY
According to the Labor Department, there are just over 100,000 people who work in textiles now and there are just three mills making denim in the U.S. Wikimedia Commons
NAFTA Explained

According to the Labor Department, there are just over 100,000 people who work in textiles now and there are just three mills making denim in the U.S. Wikimedia Commons
Listen Now

We’re going to start a series today about the North American Free Trade Agreement. The president has promised to renegotiate the deal. It’s a key element of the American trade economy but not all that understood. Especially when it comes to your pants, assuming you’re wearing blue jeans.

When NAFTA became law in 1994, there were almost 500,000 people working at textile mills in this country. That’s making everything from sheets, to socks, T-shirts and the like. According to the Labor Department, there are just over 100,000 people who work in textiles now and there are just three mills making denim in the U.S.

Peter Kim is the CEO of Hudson Jeans. When we spoke to Kim back in February for our Corner Office series, he told us that he had moved a lot of production down to Mexico. So once we decided to do this series about NAFTA, we went to see him at work in Commerce, California, not far from Los Angeles. Below is an edited transcript of his conversation with host Kai Ryssdal.

Kai Ryssdal: You source your denim overseas, right? Italy, isn’t that what you told me?

Ryssdal: What is it that gets done in Mexico?

Kim: So for us, we are doing a full-package deal out there. So we partnered up with two really good factories that we found, and these guys are responsible for start to finish. All we have to do is spot check it in between. But they’re running the whole process, so that makes it even more critical that we are partnered up with the right people that believe in the quality of attention to detail because we’re losing control of that piece of it.

Ryssdal: What happens to your business if, as the president has talked about, NAFTA either goes away or changes in some way?

Kim: That’s, I guess, a big, big question, which I know Mexico is concerned about because I talked to the factory owners down there, and they’re heavily concerned about that. At the same time, people here are concerned as well, trying to figure out what is the next move.

Ryssdal: Could you see a day when you bring production back here to the States?

Kim: It’s a constant conversation that we have. We actually still do production here. We probably do about 15 to 20 percent, probably within a 10 mile radius [from] here. One of the benefits, I think, about domestic [production] is speed. If something goes wrong, we can react much quicker and make adjustments, like on the fly. Whereas, if it’s in Mexico or anywhere else, you have that transit time. I was, literally, right before you guys came in, I was sitting down with a factory here, a domestic factory, talking about longer-term strategy.

That domestic factory he was referring to, the one still making blue jeans in the U.S., is DNA Textile Group. It is based in Columbus, Georgia, and Monte Galbraith is the company president. He has been in the textile industry since he was a teenager and says the industry and Columbus itself is just a shell of what it used to be.

Monte Galbraith: This was a textile town. There were thousands of looms and hundreds of thousands of spindles all up and down this area. You know, of course times have changed. Since NAFTA was put into place, just about everybody has gone out of business in the textile business. There’s just very, very few of us remaining.

Ryssdal: Why do you need NAFTA?

Galbraith: Well, you know, that’s kind of a loaded question. NAFTA, 20-some-odd years ago when it was put into place, it just shattered the textile industry in the U.S. This was a healthy, thriving industry that’s now just a shadow of its former self. But as of now — the way that it has settled in, where the production has kind of right-sized to the marketplace today — the way it’s working now is the fabrics that we produce in the States do go into Mexico duty free and then they come back and finished garments duty free. So therefore, if NAFTA goes away, those rolls of fabric that we would ship into Mexico to be made into garments to come back – full duty would be applied to the total value of that garment coming back in.

Ryssdal: Could you stay in business if NAFTA went away?

Galbraith: If it went away, which frankly, I don’t think it is. I think it’s going to get renegotiated, and I don’t have any inside information. But I’ve got to believe that there’s so many industries, major industries in the U.S. that are so entrenched in the supply chain is the way it flows back and forth between Canada, U.S. and Mexico. But yes, if you were to take NAFTA and put a 20 percent border tax on everything coming back, yeah, it would definitely put us out of business. No doubt about it. Because the products that we make all ship down to Mexico duty free and they all have to return duty free. And if that advantage was taken away, it would put us out of business.