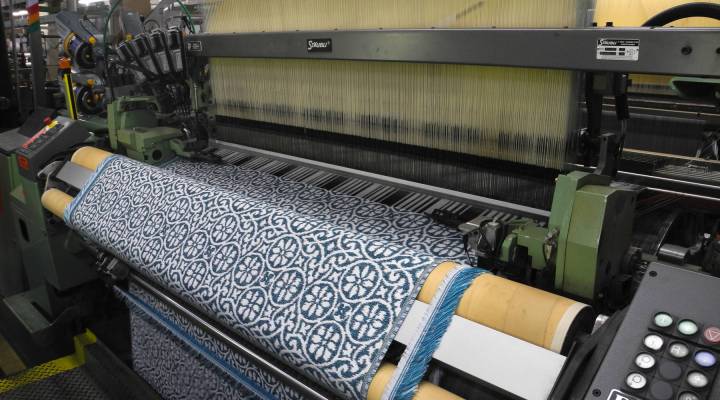 Gloria Craven at her home in Eden, North Carolina.

But the biggest of them all? Craven pulled a stack of photos of then-candidate Barack Obama from a plastic bag on the floor by her couch.

Craven introduced Obama at a campaign rally in North Carolina, after which she was asked to speak at the Democratic National Convention in Denver. She recalls standing at the podium, telling the audience “how our town had lost all the textiles, how many people lost jobs.”

Textiles – that’s why Craven gets all this attention. She worked in the textile industry for 30 years, her husband for 41. She made bedspreads, then blankets, and finally towels. Twice, the mill she worked for closed. She’d transfer to another division, until whole company shut down for good in 2003. It was the largest layoff in North Carolina history. “It’s just hard,” Craven said. “I mean in this town, basically when you came out of high school, you went to the mills because this was a mill town.”

In a recent Marketplace-Edison Research poll, a majority of respondents blamed trade deals for the loss of manufacturing jobs in the economy, over other natural changes in the economy. However, while trade policy was one factor in the severe contraction of the U.S. textile industry, Auggie Tantillo, the president and CEO on National Council of Textile Organizations, said it’s far from the sole cause.

The basic cloth Craven worked on and other products made in the U.S., like denim, are relatively easy to make, and therefore have been very vulnerable to global competition — especially after the Asian currency crisis of the late 90s, when value of Asian currencies plummeted against the dollar. That made their already cheap exports even cheaper.

“It was desperate times,” recalled Tantillo. “If you looked at the Bureau of Labor statistics information on a monthly basis, better have your Prozac because it was depressing – 10,000 jobs lost in the U.S. textile sector, 8,000 jobs the next month and you don’t know when the run-away train is going to come to a stop.”

In addition to the currency crisis, Tantillo cited some “growing pains” with NAFTA; there was the phasing out quotas that limited how much countries could export to the U.S. each year; plus, China received improved access to the U.S. markets as it joined the World Trade Organization in 2001.

Today, the textile industry employs less than half the workers it once did. But Tantillo said he believes out of all that pain came a stronger, more specialized industry. Many of American textile companies still make apparel fabrics, but the fabric may stretch further or wicks moisture better. Alternatively, it may have a totally new application. “We use textile products in all types of construction, filtration for water, for temporary storage devices,” said Tantillo.

The NCTO now supports a big pending trade deal between the U.S. and 11 other countries, the Transpacific Partnership.

U.S. companies have had to diversify, to find their niche – often with really high-tech production. Technology has also dramatically reshaped this industry and its workforce. “About 20 years ago in this industry, all of this was a manual operation,” said Randy Blackston, vice president of operations for Glen Raven, as he stood on stood in front a machine that swaps out a row of bobbins, fat with thread, with skinny empty spools. Dozens of robotic arms moved in unison. Changing out full bobbins used to be done by people, a time-consuming process that now takes minutes.

Stools of thread at a Glen Raven plant in South Carolina.

Glen Raven dates back to 1880. By the time the company started building this million-square-foot plant in South Carolina in the 1990s, about 80 percent of what it made were apparel fabrics. Executives looked at the market and realized they needed to specialize. “Now, it’s less than 1 percent,” said Leib Oehmig, Glen Raven’s president and COO.

But Oehmig says, given the highly competitive nature of the industry, U.S. textile companies can’t get too comfortable. “While I get up and put my hand over my heart as we talk about Sunbrella every day, if you were to tell me that five years from now we were doing something entirely different, well, it’s certainly a possibility that’s out there,” he said.

“The most successful producers in the U.S. were those that, to use term from our entrepreneurship people, they pivoted,” said Patrick Conway, an economics professor at the University of North Carolina Chapel Hill. “Rather than say, ‘Let’s produce large quantities of denim fabric.’ They said, ‘Let’s look at what we do best. Let’s exploit our comparative advantage.’”

Comparative advantage, a basic principle of economics, is the idea that countries should specialize in what they’re good at relative to other countries and trade for the rest. “We can all be made better off,” said Conway. “In the end, the outcome are the lower cost goods and services we’re able to buy at any of our large stores.”

In other words, Conway said that what happened to the textile industry is generally how trade is supposed to work, but that doesn’t mean the transformation hasn’t been painful.

A pile of fibers at a Glen Raven plant in South Carolina. These fibers will be spun into thread and woven into Sunbrella cloth, a highly durable fabric and one of Glen Raven’s biggest product lines.

It also may not be quite a perfect textbook system. Tantillo cited the support and subsidies some governments give their textile industries, which can mean companies aren’t competing solely on their merits. Additionally, in theory, laid off workers would get new jobs in other parts of the economy. In practice, recent research shows that process has been harder and slower than expected. Some people wind up dropping out of the workforce or take lower paying jobs.

When Gloria Craven got laid off from her last textile job in 2003, she went through a government program that helps retain workers who lost their jobs due to foreign competition. She got a new job as a respiratory therapist. “I was going to start at $20 an hour,” she said. “That was just starting pay.”

She was remarkably close to closing the loop for how trade is supposed to work. But then she got a really bad infection, was hospitalized, and now she’s on disability. She never started the new job.

“Fate stepped in and changed my route,” she said.

Correction: A previous version of this story misspelled Leib Oehmig’s name. The text has been corrected.