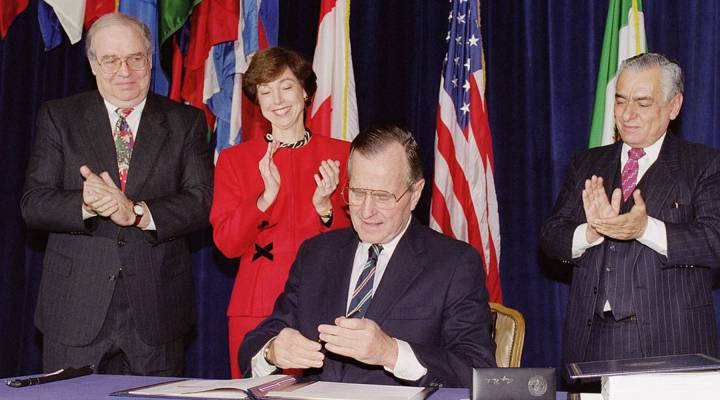 Curious about NAFTA? Wondering what, exactly, it is? And what’s at stake if it suddenly disappears? We’ve got a series for that! For our special NAFTA coverage, we spoke to the people who helped create NAFTA, and we tried to answer why this has become one of the most controversial topics in our society.

The clock may be ticking on the North American Free Trade Agreement as we know it. President Trump formally announced to Congress, Canada and Mexico that he intends to redo NAFTA. Talks could begin as soon as mid-August of this year. But what will those talks look like? And what stands to change this time around? Marketplace host Kai Ryssdal spoke to former U.S. Ambassador Carla Hills, who was the U.S. trade representative under President George H.W. Bush. Hills was one of the architects of NAFTA. Marketplace has spoken to Hills before, along with her Canadian and Mexican counterparts. But this time, we look at what the coming negotiations might look like. The following is an edited transcript of the interview.

Kai Ryssdal: Last time we spoke, ma’am, you said NAFTA was a premier trade agreement, and this is a quote, “for its time.” What do you think of it now? It needs to be changed, no?

Ryssdal: Do you believe that things need to be added to the North American Free Trade Agreement or taken away, if that makes sense? Clearly digital and all of that stuff, yes, but what is in there that might need to not be there anymore?

Hills: I don’t think of anything that needs to be subtracted. There needs to be a great deal added. When you look back at what the NAFTA actually did, it eliminated tariffs on all industrial products. We want to keep that. We have provisions to protect intellectual property, but intellectual property has expanded enormously since the early 1990s. But that doesn’t mean we want to give away the rules that we have. We want to add to them.

Ryssdal: This is going to be a three-way negotiation, right? The Canadians and the Mexicans and the Americans will all sit down at the table. What is your guess as to how these talks are going to go? Because when we had you on the program the first time, you related an extremely collegial environment, shall we say. What’s your guess as to this time?

Hills: Well, it would be just a guess. I think that we were collegial, way back 25 years ago. And my best hope is that they will continue to be collegial. After all, it’s a win-win situation. North America has become one of the most competitive regions in the world, and we wouldn’t be there by moving individually. We benefit from the supply chains that have linked our economies, and we want to keep that going.

Ryssdal: Let me just ask you, as long as I have you on the phone, ma’am: I don’t know if you follow the president on Twitter, or if you’ve been paying attention to any of his remarks about Germany and the U.S.-German trade relationship. But if you’re the German trade minister, with the president of the United States now taking aim at the German-American trading relationship, what are you thinking?

Hills: Well, I think it’s much better to try to sit down and negotiate in a friendly fashion. My own view is that when you try to open markets, you benefit. You know, 80 percent of today’s trade is conducted through global supply chains. Unfortunately, very often we hear that exports are good and imports are bad. But in this country, 60 percent of what we import are intermediate products that are used to make our exports more competitive. So if we are hostile or restrictive on our imports, we’re not going to have the same amount or quality of exports. So let’s be real and try to see what we can benefit from opening global markets.

Ryssdal: Just to get it back to NAFTA, do you anticipate that this is going to get done, and that we will, at the end of the day, still have a North American Free Trade Agreement?

Hills: I hope they move rapidly and get it done. You know, we negotiated the original agreement in 14 months. If they could move rapidly, it would make all the difference to businesses. And uncertainty means you stay your hand, and that affects the economy adversely. So yes, they should move rapidly, and politics also recommends that they move rapidly. We don’t know what’s going to happen with the elections down in Mexico next year in July.

Still have some questions about how NAFTA came about? Well, here’s a timeline which Marketplace host Kai Ryssdal put together to help you orient yourself.