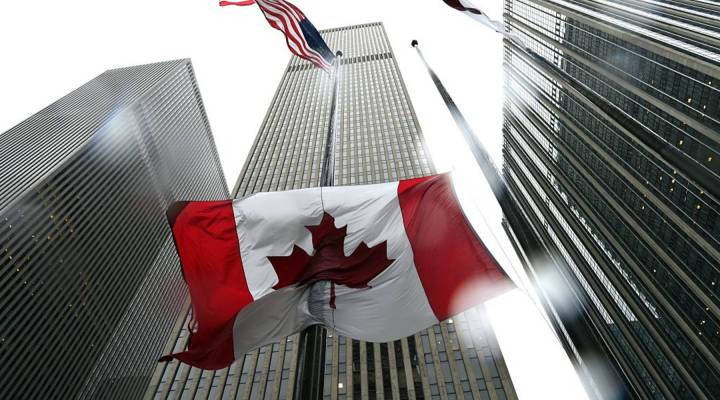 COPY
“Thirty-five states in the United States have as their No. 1 export market Canada. Nine million jobs in the United States are dependent on that trade relationship,” said Michael Wilson. He was the minister of trade when he participated in the NAFTA negotiations. TIMOTHY A. CLARY/AFP/Getty Images
NAFTA Explained

“Thirty-five states in the United States have as their No. 1 export market Canada. Nine million jobs in the United States are dependent on that trade relationship,” said Michael Wilson. He was the minister of trade when he participated in the NAFTA negotiations. TIMOTHY A. CLARY/AFP/Getty Images
Listen Now

Yesterday we talked to Jaime Serra, the man who negotiated NAFTA on the behalf of Mexico. Today, we’re talking to his counterparts in the United States, former Ambassador Carla Hills, and in Canada, former Ambassador Michael Wilson. Hills served as HUD secretary under President Gerald Ford and was the U.S. trade representative under President George H.W. Bush. Wilson served as finance minister in Canada and was the minister of trade when he participated in the NAFTA negotiations. Below are some edited excerpts of their conversation with host Kai Ryssdal.

Here’s what they had to say about a baseball game they attended with Serra during negotiations:

Michael Wilson: We did go to that baseball game. We broke up about halfway through the game — I think it was around the fifth inning. Jaime Serra wanted to go back to the negotiating table. He couldn’t sit still. As we were walking out of the ballpark, there was a huge roar, which I found out the next day was a triple play. It would have been the only triple play that I would have seen in my life. And I always remind Jaime of that and criticize him deeply for disrupting the game just for a bloody trade negotiation.

Kai Ryssdal: [Jaime Serra] tells this story on himself too. It’s a good one.

Carla Hills: There’s no question about that. Jaime was a soccer player. He didn’t care about baseball. Michael cared about baseball a whole lot. But it’s a good story and it did happen.

Earlier in the interview, Hills recounted how the negotiations kicked off:

Hills: I talked to Jaime Serra who was the trade minister in Mexico and he was very interested in moving forward with a bilateral with the United States. I came home and talked to the president and we decided to go forward and got fast-track or trade promotion authority from our Congress. And I was about to sit down with Mexico when I got a call from the then-trade minister of Canada who said, “Carla, you’re leaving me out.” I said, “Your government almost crashed over our negotiation of the U.S.-Canada agreement. I can’t imagine you want to be at the table.” He said, “Well, I do.”

Ryssdal: Well, so, Ambassador Wilson, let me ask you to climb in here, sir, and give me your perspective on what was going on.

Wilson: Well, not much different than Carla. But what we did not want to have is a hub-and-spoke thing. We had already got our trade agreement with the United States five years before. And therefore, we thought, if Mexico has a direct agreement and we don’t have a direct agreement with Mexico, the United States is going to be in a position where they have all the advantages but we only have two-thirds of the advantages.

Ryssdal: After all the negotiations, after all was said and done, as you look back on it, did NAFTA turn out the way you thought?

Hills: I think NAFTA turned out very very well. We eliminated all industrial tariffs, opened up the services market, protected intellectual property, and between Mexico and the United States, opened up agriculture. We also had a good dispute settlement mechanism. And so, yes, it was a premier trade agreement for its time.

Ryssdal: Ooh, key caveat there, Ambassador — “for its time” — what does that mean?

Hills: That means that in the last 23 years, that the economy has moved to automation, and that there are things we could build upon that platform. It isn’t that the agreement is bad. It is good and is a strong platform, and the three of us should work together. There are a number of issues we could deal with that would continue to make North America the most competitive region in the entire world.

Ryssdal: Ambassador Wilson, Ambassador Hills used the phrase “the best agreement for its time.” As you know, the current occupant of the White House calls it the “worst deal” that he’s ever seen. Do you take seriously his threats to dismantle it?

Wilson: Well, I do take seriously those threats. Because a lot of the things that he has said in the campaign, he has turned out to actually do a number of them. So yes, we do take them seriously. But what I think we’ve been doing from the Canadian side, and I’m sure Mexico has been doing the same thing, we have been pointing out the importance of that relationship. Thirty-five states in the United States have as their No. 1 export market Canada. Nine million jobs in the United States are dependent on that trade relationship. To disrupt that flow would be very, very important, in a negative sense, to both the United States and Canada.

Ryssdal: Ambassador Hills, what happens though, if the president goes ahead and either abrogates the treaty or changes it substantially?

Hills: Well, we would lose the advantages of our first-largest export destination with Canada and our second-largest export destination with Mexico. With Canada, we have a fallback of the U.S.-Canada agreement. With Mexico, we do not. We would rely upon the World Trade Organization agreement. Tariffs would go up, and so it would hurt the U.S. manufacturers because about 60 percent of imports into the United States are intermediate goods. That’s what makes our exports competitive is that we can get the best goods to make our exports work. So it would be a disadvantage to the United States and we would lose jobs.

Ryssdal: Ambassador Wilson, do Canadians think and talk about NAFTA as much as Americans seem to?

Wilson: We do in a positive way. I would say that the general feeling with both people in the manufacturing world as well as others, have a positive sense on NAFTA. I think there’s another point that should be made here. There’s a lot of talk about jobs lost through NAFTA because of these terrible trade agreements. But what is clearly the cause of the lost jobs is technological change. And we’ve got to change the focus onto the changes in technology and do the things that will help mitigate the impact of that on individuals. But also, the United States is in a terrific position to do this, to take advantage of that technological change because so much of it is driven out of your country.

Ryssdal: But Ambassador Hills, as you know, automation is not a great selling point. Lousy trade deals and people stealing American jobs is a great political selling point.

Hills: You’re correct. That’s why we have to get out to the American people what’s involved in our agreement with our northern and southern neighbors that have made us competitive. We also need, in addition to education, to help those that have been dislodged from their jobs. It doesn’t make any difference to them that it’s automation or whether it is trade. And Michael Wilson is absolutely correct. The overwhelming majority, here we say about 93 percent, of jobs are lost due to changes in automation technology. But we need programs that are stronger, that turn people for the 4 million jobs that we have looking for skilled workers. You don’t need a doctorate or a college degree you need 16 or 14 weeks of training, and that’s what we should be working at.