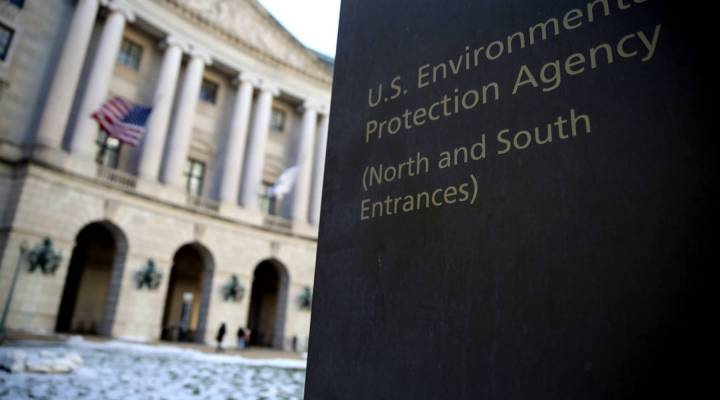 COPY
EPA staffers have been dealing with massive shifts in the way their agency operates, with executive orders that have mandated reviews or canceled several environmental initiatives and rhetoric about reducing regulation. Justin Sullivan/Getty Images

EPA staffers have been dealing with massive shifts in the way their agency operates, with executive orders that have mandated reviews or canceled several environmental initiatives and rhetoric about reducing regulation. Justin Sullivan/Getty Images
Listen Now

The White House’s budget mirrors initial proposals to cut funding for the Environmental Protection Agency by about 30 percent. While the budget still faces negotiations in Congress, the agency seems to be preparing for major reductions, including staff.  The agency announced last week it’s setting aside $12 million for buyouts and early retirements. EPA employees who feel unsure about their future with the agency have been seeking other options, and there are employers who want to give them jobs.

The California Public Utilities Commission is one. The state agency regulates power, which includes helping California meet its ambitious climate change goals. Michael Picker, CPUC president, said the agency has 250 open jobs to fill. On a recent trip to Washington, D.C., he added recruiting to his agenda.

“I figured, well, you know, budget cuts coming at EPA,” Picker said. “And these are really good high-level, skilled people. Maybe some of them would be interested in continuing to do their work on climate change in California.”

Picker’s agency is just one of several state offices currently hiring. So, his staff created a website where interested people could sign up for more information on positions at the CPUC, the California Air Resources Board and the California Energy Commission. For his trip, he packed 2,000 fliers, advertising the agencies as great places to work. He made signs that read “Fight Climate Change, Work for California.”

“And I just went out to Metro stops close to the Department of Energy on the first day and then EPA on the next day, because those are the agencies that probably had the most skill sets that would be relevant to the work we do at the three agencies who are joining with me,” Picker said.

He stood outside the stations, wearing a heavy coat and scarf, trying to snag the attention of shivering passersby, and convince them that he genuinely was trying to hire some of them. Word of his recruiting efforts spread, and strangers began arriving to help him pass out the fliers.

“One day we had as many as seven people show up at the EPA to leaflet,” Picker said. “It was pretty phenomenal to see folks I had never met before, who I had not talked to, just kind of showed up to help.”

EPA staffers have been dealing with massive shifts in the way their agency operates, with executive orders that have mandated reviews or canceled several environmental initiatives and rhetoric about reducing regulation. One union leader said the shifts have taken a toll.

“Morale is so low, you need a ladder to get out of the gutter,” said John O’Grady, president of the American Federation of Government Employees, National Council of EPA Locals #238, which represents about 9,000 EPA workers.

O’Grady said the union hasn’t seen an uptick in people leaving the EPA, but fears of budget cuts and uncertainty about the agency’s mission run high.

Many staffers are weighing their options, according to Ellen Weinreb, a headhunter for corporate sustainability. Weinreb said she’s been getting a lot of EPA resumes.

“I’ve had about four times more than I normally would have coming in,” she said.

Her advice for environmental federal workers looking for a change?

“Get out of Washington,” Weinreb said.

She said while many non-governmental organizations are based or have offices in Washington, D.C., a large exodus of workers from the EPA would flood the market.

“Within Washington, it’s fiercely competitive for these roles,” Weinreb said.

Other places will have more options. In California, Michael Picker said his agency has already made offers to 10 employees from Washington, D.C. Four have accepted. He said passing out fliers also had the side benefit of providing validation for employees, many of whom thanked him for doing it. “They felt like at least somebody was interested in what they do, and valued their time and energy and skills and life choices; and on our side, we think we’ve found some pretty good recruits,” Picker said.