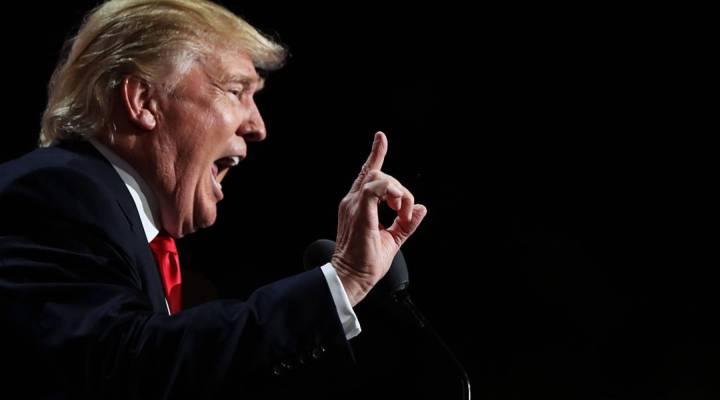 The Trump administration’s $1.15 trillion budget proposal for the upcoming year calls for reduced funding for the Environmental Protection Agency and a major boost for defense spending.

The biggest winner: those who favor a smaller government. The proposal, released today, dramatically cuts the size of the federal government, slashing budgets for many agencies and eliminating dozens of programs.

However, the budget doesn’t address all government spending. It omits figures on entitlement or mandatory spending like Social Security and Medicaid, interest payments, revenues or deficits, according to the Center on Budget and Policy Priorities.

Here are some of the areas where we might see changes:

Defense and the Department of Homeland Security

Defense spending would get a big boost under Trump’s plan. He wants a $54 billion increase for military spending.

“This defense funding is vital to rebuilding and preparing our armed forces for the future,” the proposal said.

And he wants money for the border wall — Mexico still says it won’t pay for it.

It remains to be seen how viable a wall would be. There are a whole host of geographic, financial and logistical problems associated with construction, along with the issue of land ownership.

“Only about a third of the border is actually controlled by the federal government,” David Bier, an immigration policy analyst at the Cato Institute, recently told us. “So we’re likely to see some serious pushback from property owners on the border who will fight in court seizures that take their land in order to build this wall.”

Also on the issue of immigration, there’s a boost for the Department of Homeland Security to hire staff at ICE and border patrol to capture, detain and deport people who are here illegally. Overall, the plan would increase homeland security’s budget by $2.8 billion, or 6.8 percent.

The EPA would stand to see its budget cut by about a third, from over $8 billion to $5.7 billion.

More than 50 of its programs will also be completely eliminated, and funding will end for the Clean Power Plan — a set of rules aimed at curbing carbon emissions from power plants.

Republicans have criticized the EPA for regulations that they think are overly aggressive. The agency has even found an opponent in its new head, Scott Pruitt — a climate-change denier who has sued the EPA 14 times. His LinkedIn bio has described him as a “leading advocate against the EPA’s activist agenda.”

Many have raised concerns about potential cuts to the EPA based on its importance to state-level programs, superfunds and cleanups, and environmental justice communities. About half of the agency’s budget passes through to state and local governments.

Others also worry about the what cuts could mean for the economy. Fawn Sharp, president and CEO at the Quinault Indian Nation, told us that the tribe has a grant in place for $118,000 to fund water quality monitoring and combat invasive species threatening the tribal fishing industry. She said that thousands of jobs are connected to the fishing industry.

The Department of Agriculture

The USDA would see a $4.7 billion cut, reducing its budget to $17.9 billion, which will particularly affect programs linked to certain environmental issues like wastewater treatment. Rural communities can instead be served by the private sector or other federal investments in rural water infrastructure, according to the budget document.

Staffing at agencies connected to the USDA will also be reduced, and the department’s McGovern-Dole International Food for Education program, which supports child development and food security in low-income countries around the world, will be eliminated.

Additionally, the budget blueprint says it will continue to support farmer-focused research. Trump has nominated Sonny Perdue to be secretary of agriculture, a choice that many farmers are looking to advocate for their labor needs, especially since Congress writes the next farm bill this year.

The state department would see big cuts — a nearly 28 percent or $10.1 billion reduction — limiting foreign aid and grants to international organizations like the United Nations and the World Bank.

In line with the current administration’s view toward domestic climate change policies, the budget calls for an elimination of the Global Climate Change Initiative and U.S. funding for the U.N.’s Green Climate Fund.

But areas where the U.S. will stay committed include its assistance to Israel. It will provide the country with $3.1 billion, in part to help Israel “defend itself from threats.”