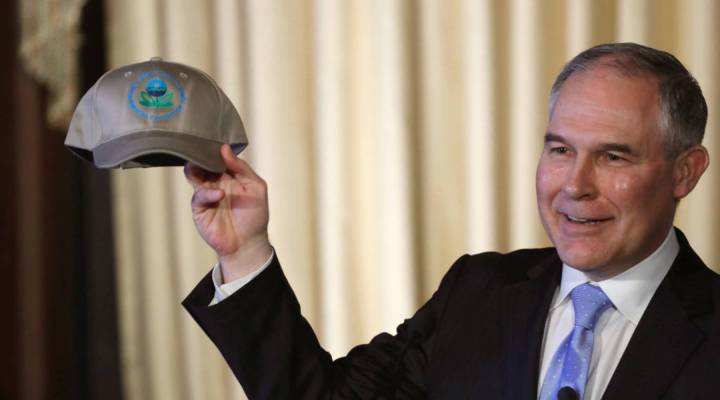 The president is planning to slash the Environmental Protection Agency budget by a quarter, blasting the environmental regulations as a “hardship on American companies.”

Historians see many parallels between President Donald Trump and the early years of Ronald Reagan, though the Reagan period ended in EPA scandal.

Upon entering office, President Ronald Reagan asked companies to send him their most-despised regulations. He pledged to ax tens of thousands.

“I’ve put a freeze on pending regulations,” Reagan said in a February 1981 speech, “and set up a task force under Vice President Bush to review regulations with an eye toward getting rid of as many as possible.”

If it sounds familiar, Trump has imposed his own regulatory freeze. And like Trump, Reagan supported EPA budget cuts to boost defense spending.

“If you don’t want a lot of regulations, don’t hire a lot of regulators,” said Jim Tozzi, a consultant to chemical and tobacco companies who oversaw the EPA budget in the early 1980s at the Office of Management and Budget. “So I held them down. And during that point in time, we had a lean and mean agency.”

“It was an agency being led by somebody who fundamentally opposed what the Environmental Protection Agency was created to do,” said Lauren Rikleen, an EPA enforcement lawyer at the time.

Under Gorsuch, agency enforcement actions fell 80 percent. Managers under her supervision created a “hit list” of pro-regulation bureaucrats to dismiss.

And documents later made public showed chemical companies seeking relief from toxic waste cleanup rules had set up special meetings with political appointees. Career attorney Rikleen said she walked in on one of them and was clearly unexpected.

“The shock on the company’s face when I walked into that room was, I remember that to this day,” Rikleen said. “But the whole thing should never have happened, yet that was happening all the time.”

Of the more than 400 hazardous waste sites identified by the federal government, only five got cleaned up during Gorsuch’s tenure.

“Dealing with parents who have lost children to childhood leukemia, you can’t calculate the cost of a slowed cleanup when that’s taking place around the country,” Rikleen said.

Eventually news leaked of secret meetings and closed-door deals with companies. Congress held Gorsuch in contempt for holding back documents related to toxic waste cleanup, and she quit after two years. Gorsuch defenders say she was made a scapegoat for decisions made by superiors in the Reagan administration.

One of Gorsuch’s top deputies was convicted of lying to Congress — about a chemical company, her former employer, dumping toxic waste – and sent to prison.

Could this happen again? Back then, accountability came after congressional investigators from the Democratic-majority House of Representatives looked into allegations and leaks.

“Now, President Trump has majorities in both the Senate and the House,” said ex-EPA official Daniel Fiorino, who now teaches environmental policy at American University. “The checkers and balancers aren’t really there, in a sense.”

Fiorino said the early ’80s were the EPA’s toughest time, adding, “I think we’re on our way to matching that now.”