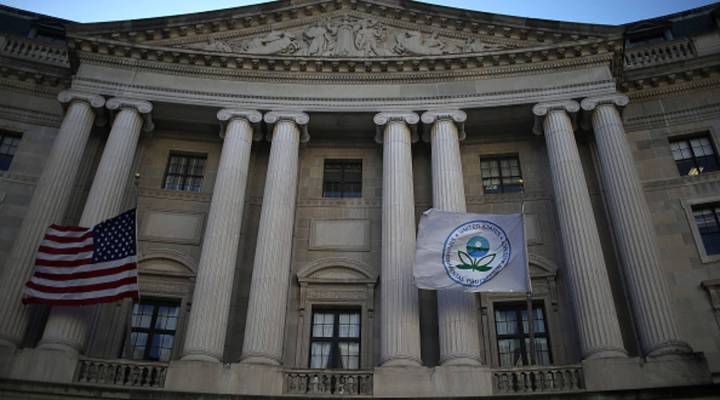 COPY
In 1981, Ronald Reagan tapped conservative Anne Gorsuch to run the EPA. She oversaw a one-quarter budget cut at the agency, and enforcement cases by investigators plummeted. Justin Sullivan/Getty Images

Scott Pruitt, administrator of the Environmental Protection Agency in the Trump administration, has drawn fire for being too close to the industry he regulates by reversing a planned ban on a pesticide and rolling back rules of power plant pollution. But this isn’t the first time the EPA pendulum has swung this far. The last time it happened, in the dawn of the Reagan administration, the efforts crashed and burned.

The story begins in 1978, when heavy rains fell on the Southern California city of Glen Avon. The deluge overflowed a nearby toxic waste site, which for decades had been a corporate dumping ground, sending a chemical foam into Glen Avon. That’s where Penny Newman’s kids were playing. She still remembers.

“They were making beards out of this foam,” Newman said. “They were becoming snowmen in toxic foam. And nobody told us what was going on.”

It turns out the industrial sludge contained arsenic, DDT and cyanide.

“Their tennis shoes were falling apart,” Newman said, “their Levis disintegrating. My youngest son was having blurred vision. He’d come home from school talking about how the tether ball poles were stacked on top of each other, having this double vision.”

Newman would go on to become an environmental activist for toxic waste cleanup, just as Congress discovered hundreds of toxic waste sites around the country and passed a bill to clean them up. The law, known as Superfund, collected money from taxpayers and polluting companies to pay for cleanup projects.

But weeks after Superfund passed, America ushered in a new president who was a friend to some of those companies: the anti-regulation Ronald Reagan.

“Regulations of every kind, on shopkeepers, farmers and major industries add $100 billion or more to the cost of services we buy,” Reagan stated in an economic speech to the nation on February 5, 1981.

The Reagan administration brought a hostility to the government that shook up the nation’s capital on both the left and right.

“It was clear as soon as he took office that he was not as sensitive to the environment, to the work the EPA did,” said David Durenberger, who at the time was a Republican senator from Minnesota serving on the Environment and Public Works Committee.

The EPA was a young agency at the time, just a decade old and growing as it enforced recently passed laws on clean air, clean water and toxic waste.

But in 1981, Reagan tapped conservative ideologue Anne Gorsuch of Colorado to run the EPA. She became the first woman in the job. Her son, then a teenager, is Neil Gorsuch, the newest Supreme Court justice.

When she took over as administrator, Anne Gorsuch had a record of criticizing the agency and its bureaucrats.

“It seemed like she came in with deep suspicion of them and of their motivations,” said Jonathan Lash, president of Hampshire College and author of a book on the Gorsuch-era EPA, “A Season of Spoils.” “The nickname she got from the staff was ‘The Ice Queen.’”

Gorsuch oversaw a budget cut to her agency of one quarter. Enforcement cases by investigators plummeted.

“There were explicit communications,” Lash said, “saying that every enforcement case you bring will be a black mark against you.”

Cleanup of the toxic waste site in Southern California — the one that spilled into Glen Avon — had been expected but was inexplicably delayed. Documents leaked to Congress at the time suggested a number of political motivations: to undermine the Superfund regulation, to protect polluting companies and to deny an environmental victory to California Gov. Jerry Brown, a Democrat running for Senate at the time.

“And caring about the people who were drinking poisoned water didn’t factor into the equation,” said Hugh Kaufman, the whistleblower who leaked some of the documents in the case. “That’s when I became sort of a low-level figure in the scandal.”

The scandal blew up in Washington. Congressional investigators accused Anne Gorsuch of botching Superfund cleanup and held her in contempt of Congress. She quit in disgrace after two years. Her deputy, Rita Lavelle, went to jail for lying to Congress about her knowledge of the toxic waste dump in Southern California. Lavelle’s former employer — Aerojet General Corp. — turned out to be one of the companies using the site.

In the meantime, the EPA tried to retaliate against Kaufman, sending agency investigators to follow him and seek evidence to use against him.

Needless the say, nothing came of the allegations.

“They thought they could squeeze me by checking out my sex life,” Kaufman said. “But I was an old man even then, wasting their time.” Kaufman is still at the agency.

After Anne Gorsuch quit in 1983, the agency brought back its original administrator from 1970, William Ruckelshaus, to restore order. He had bipartisan support.

And yet, longtime EPA regulator Mike Cook believes the scandal damaged morale across the agency. Cook, now retired, recalls that many once-idealistic colleagues either quit or became jaded clock watchers.

“People working 60, 70, 80 hours a week, suddenly they were working 40-hour weeks,” Cook said. “And we went from a couple of softball teams to nine softball teams.”

To him, the agency never recovered.

“That imposed a level of cynicism about outside political interests,” Cook said, “and that has just never gone away.”