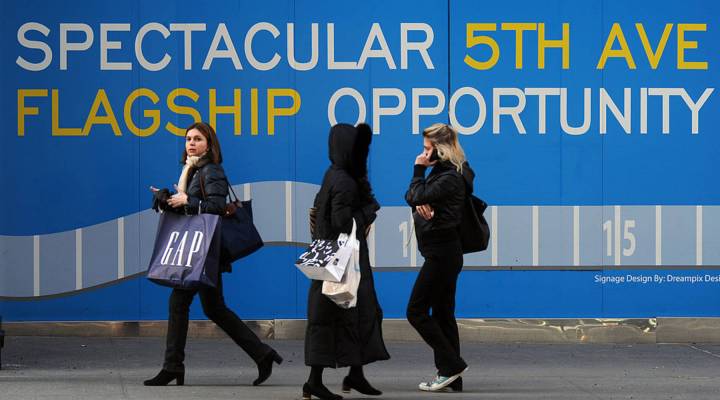 COPY
A retail space is available for rent on Fifth Avenue in New York, where rents and vacancies have spiked. EMMANUEL DUNAND/AFP/Getty Images

A retail space is available for rent on Fifth Avenue in New York, where rents and vacancies have spiked. EMMANUEL DUNAND/AFP/Getty Images
Listen Now

As President Trump visits New York City for the first time since his inauguration, he might find that things in his old neighborhood look a little bit different.

That neighborhood, Manhattan’s Fifth Avenue, is home not only to Trump Tower, but the most expensive strip of retail real estate in the world. Gucci, Tiffany, Louis Vuitton and more have flagship stores there.

According to Tom Cusick, president of the Fifth Avenue Business Improvement District, Trump’s security — men with machine guns and dump trucks full of sand blocking the street — basically shut down foot traffic during the transition period. Cusick said business on the avenue tanked.

“A minimum of $40 million was lost from just this area, about a two-block stretch,” Cusick said.

Things have recovered a bit since Trump moved to Washington, he added. But the sales hit came at a bad time — roughly one in six storefronts was already sitting empty, according to real estate firm Cushman & Wakefield. The explanation is simple, according to Marcus & Millichap broker Nat Rockett: a simple bubble in real estate rents.

For a few years, fancy brands could afford the high rents. Until something else started happening. Consumers began to shop online in serious numbers, according to independent retail analyst Stacey Widlitz.

Widlitz believes we’re moving to a world where something like 30 percent of all clothing sales will happen on the internet. So with expensive leases for flagship stores on Fifth Avenue, she said, “retailers are starting to rethink. They’re the most expensive leases in the world, and maybe it’s just not worth it.”

Making things worse, adds Rockett, is the dip in tourism, what he calls the “big engine” of sexy, expensive retail locations.

Foreign tourists spend something on the order of three times as much as domestic ones at stores like these, Rockett said. And according to New York’s tourism office, the city expects 300,000 fewer international visitors this year.

Rather than lowering rents, landlords are trying different things to entice tenants into empty space: a few months of free rent, or perhaps a little help building out the space. Rockett explains that because retail leases are much longer than residential ones — 10 or 20 years — landlords aren’t necessarily being greedy here. In many cases, they may have only been able to finance the building’s acquisition based on certain rent expectations that were already in place. If those rents then drop below a certain point, the math no longer works out. Landlords can end up in a position where they’re only paying enough to cover their debt or losing money on the deal.

“As soon as I sign that lease for [the lower amount], I’ve essentially signed my order of execution,” Rockett said. “As long as I keep it vacant, there’s at least the chance that the market could recover and I could achieve what I had hoped for. But if I have one shot to sign this thing, and I sign that cheaper lease? I’ve executed myself.”

That’s why retailers will swallow a year’s worth of lost rent now in the hopes of locking in a higher rent later. This bet, however, carries a dangerous flip side: If the market never recovers and landlords do ultimately cave to lower rents, they’ve lost even more by not taking the bullet earlier.

The choice then, Rockett said, is between “a matter of certain death now, or the chance that it’s a prolonged and unpleasant death.” 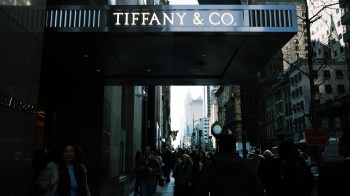 As shoppers head online, what value does a flagship store bring?