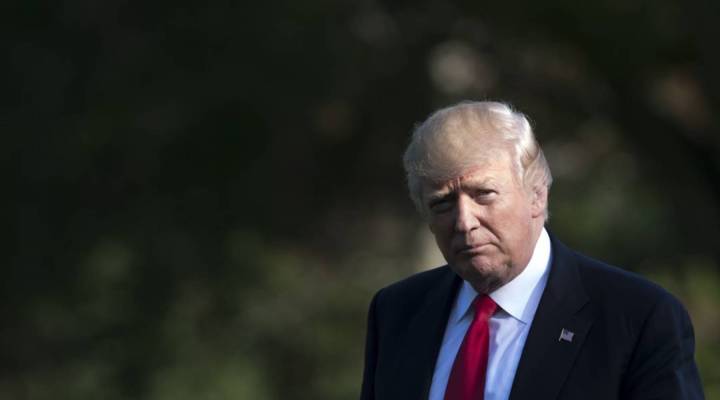 COPY
What types of people will President Trump appoint to the Federal Reserve’s Board of Governors? SAUL LOEB/AFP/Getty Images

What types of people will President Trump appoint to the Federal Reserve’s Board of Governors? SAUL LOEB/AFP/Getty Images
Listen Now

During the next year or so, President Trump will be filling at least  five vacancies on the Federal Reserve’s Board of Governors, possibly including the top spot, after Chair Janet Yellen’s term expires early next year.

Trump could ask Yellen to stay on as Fed chair. Here’s what he said in a Wall Street Journal interview a few weeks ago. He was asked if he would consider reappointing Yellen or was she “toast?”

It’s not clear how Yellen feels about staying. At a press conference last December, she was asked if she would accept another term as Fed chair if Trump reappointed her.

“I haven’t made any decision about the future,” she said. “I recognize I might or might not be reappointed.”

But let’s say Yellen leaves the Fed next February. Trump would then be able to appoint a Fed chair, plus multiple members of the Fed’s Board of Governors.

“It’s a remarkable situation,” said Andrew Levin, a former Fed economist now teaching economics at Dartmouth College. Think about this happening on the Supreme Court, he said. “Imagine that, in the course of a year, year and a half, the president of the United States would be appointing the chief justice and three or four or five of the other justices. That’s essentially the situation for the Federal Reserve Board.”

So what types of people will Trump appoint? He’s chosen business people for other top positions. Anat Admati, who teaches finance and economics at Stanford University, said Trump may do the same thing at the Fed.

On regulation, for example. The Federal Reserve is in charge of implementing some of the Dodd-Frank financial reform law. Admati said Dodd Frank isn’t perfect, but she hopes Trump doesn’t appoint Fed governors who are against any kind of bank regulation.

David Kotok, he head of Cumberland Advisors, doesn’t think Trump will go that far, but “markets expect the Trump Fed to have a lighter regulatory touch,” he said.

Kotok is worried that Trump will appoint Fed governors who want to keep interest rates too low, sparking inflation. Trump was very clear about interest rates in that Wall Street Journal interview. “I do like a low interest rate policy,” he said. “I must be honest with you.”

Now, all seven Fed governors are on the Federal Open Market Committee, which sets interest rates. So, Kotok points out, Trump will be nominating a big block of people who will have a huge say in the direction of interest rates.

“Appointments are going to be made by a president who made money in the real estate business, who was a borrower,” he said. “Of course he likes low interest rates. That is something that some of us in the financial community are concerned about.”

Kotok said the U.S. economy needs a centrist, stable Fed and would pay a penalty if Trump appointed Fed governors who are too extreme.