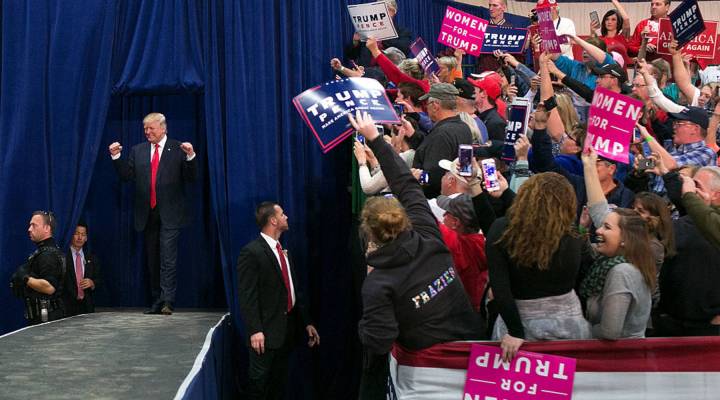 The latest “Make Me Smart with Kai and Molly” got a little heady, let’s admit.

We started off with Kai Ryssdal in kind of a bad place about the news, wondering if the broken promises, brazen mistruths and brutal videos of old men being thrown off aircraft had any quantifiable consequences at all. Then we talked with George Lakoff, a retired cognitive science and linguistics professor from University of California, Berkeley. He drew on his book “Moral Politics” to explore how our brains create moral framework and the way President Trump leverages them.

It was a dense, far-ranging discussion — we had to take a couple breaks to make sure we were getting everything! But this show is all about getting smarter, together. You guys had a lot to say about Lakoff (and nihilist Kai, for that matter), so we’ve collected the best responses here.

First, we suspected Kai wasn’t the only one feeling down on the news. Ali D. wrote in to tell us we were right:

In a weird way, I found Kai’s fatalistic “nothing matters” raincloud and the ensuing discussion  charming. It’s nice to be reminded that the people bringing us our news (1) are, in fact, people and (2) sometimes the news makes even them feel like crap. And so does coming back from vacation… Feeling connected to others is the wellspring of hope, and it’s nice to feel like we’re all in this together — not in the name of being “right” but so that we can, well, make each other smarter.

Onto Lakoff. He’s written extensively on the way our families form moral “frames” that teach us how to view all kinds of issues. Broadly, those are “nurturant parent morality,” which gives way to progressive views and “strict father,” which gives way to conservative views.

The latter is all about hierarchy and the idea that “father knows best.”

“That is what Trump not only believes, he acts and he assumes it’s correct,” Lakoff told us. “And he knows there’s about 35 percent of the county, the 35 percent who still support him, who also believe this.”

It takes an emotional appeal to sell that idea, and that makes Trump’s business savvy and salesmanship a natural fit.

“It doesn’t matter if Trump’s lies to them and they know he’s lying,” Lakoff said of Trump’s base, “because there’s a higher truth … and that’s how you get alternative facts.”

That was some cold comfort for Anne H., a self-described “born again-progressive” who supported Sen. Bernie Sanders last election cycle. Tooling around Facebook after the election, Anne told us she’s been befuddled by Trump supporters in her feed for this exact reason:

I ask what I feel are non-threatening, open-ended questions, just trying to get facts acknowledged. I have called out numerous factual examples of abhorrent behavior on [Trump’s] part, and awful decisions that he has made or called for that are directly opposed to their best interests, and the crickets I get in response have absolutely baffled me… My desperation for understanding has been somewhat assuaged after hearing Lakoff’s fascinating insights into the personality types. It doesn’t make it hurt less, but understanding is what I’ve been desperate for, and that certainly does help.

You might know the idea of a “strict father” running things by a different name, and Molly Wood asked about it: Aren’t we just talking about the patriarchy? Aside from “traditional family values,” why would a world view would be tied to gender in that way? Listener Clare W. pushed back at Lakoff’s reasoning.

I was disappointed by his answer and how he explained the  different moralities as a matter of nature. Yes, children need nurturing and yes, they need discipline. But the phenomenon is not called “strict parent morality,” it’s “strict father.” It’s gendered. I suspect that it is our patriarchal society that creates the conditions for this phenomenon and there’s nothing natural about it.

Now, if Lakoff’s thesis sounds like generalizing, it kinda is. We’re also, it should be said, cramming a lot of material into a short conversation. Still, Lakoff’s “profiling,” made listener Mike T. uncomfortable.

That’s fair, though Lakoff’s focus is more about a way of thinking than about actual party affiliation. There are some who argue Trump isn’t even a Republican! It’s more about how he sells his views and activates certain ways of thinking among his supporters. It’s an emotional appeal. Andrew W., a psychology grad student and Clinton supporter, wrote in to say he found Lakoff’s argument a bit “niche,” and there are other more straightforward forces at play that don’t reach back to childhood.

[Clinton] did little to acknowledge the suffering in the Rust Belt and other parts of the country that have suffered the most in the last 20 to 30 years. She ignored them, or worse, belittled them. It was disappointing, but not surprising, that they turned against her. So yes, values and morals were at play, but how many people overlooked those morals to vote for Trump because he channeled their frustration? Because in him, they saw someone who was often rejected by others, an outsider (even if he was a billionaire)? Or how many people could not let go of their dislike of Hillary, as counterproductive as it was, because she would not just come out and say she had made a mistake with her “damn emails.” and so found her dishonest. It’s all about emotions! Emotions, I say!

Indeed, this is a dynamic we’ve covered quite a bit, and we’ll continue to cover in our series “The Big Promise,” about manufacturing towns that are counting on Trump to deliver.

One last thing — Andrew wrapped up his email by turning the whole topic on its ear:

This same power of emotional argument helps explain, in my mind, why Dr. Lakoff’s research is so compelling: he has really nifty names for these alternative sets of morals and connects them to an easily understood, visceral emotional experience, the family. This is why it’s important to evaluate the science, because the emotional response can prevent us from asking the tough questions.