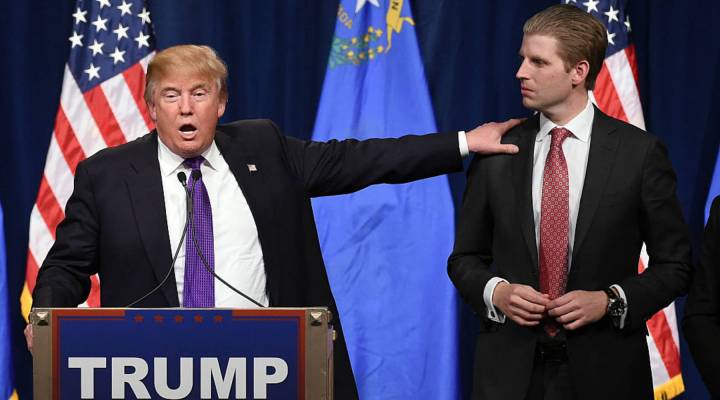 COPY
“You can't have the Donald Trump Foundation doing business with the Donald Trump course, which is what happened,” says Dan Alexander of Forbes. Above, President Donald Trump speaks as his son Eric Trump looks on. Ethan Miller/Getty Images

“You can't have the Donald Trump Foundation doing business with the Donald Trump course, which is what happened,” says Dan Alexander of Forbes. Above, President Donald Trump speaks as his son Eric Trump looks on. Ethan Miller/Getty Images
Listen Now

It’s a story about money, power and good intentions gone awry. It’s also the story of a charity and a golf course. The Eric Trump Foundation, a charity set up by the second Trump son, raised money for cancer research at St. Jude’s Children’s Research Hospital in Memphis, Tennessee, a lot of it through an annual golf invitational at the Trump National Golf Club in Westchester County, New York. But in his piece for Forbes, Dan Alexander reports that not all of that money got where it was intended go. Marketplace host Kai Ryssdal spoke to Alexander about his piece. Below is an edited transcript of their conversation.

Kai Ryssdal: So to sort of unpack this thing for a bit, I guess we start at the very beginning. Eric Trump, 10 years ago, decides that St. Jude’s Children’s Research Hospital is going to be his philanthropic focus, right?

Ryssdal: And decides, then, a way to support them is to host a golf tournament.

Alexander: Yeah. And you know, at this point it seems like he’s got great intentions. You know, a guy just comes out of college, wants to raise some money. He’s got a famous last name and a dad with a lot of rich friends. [He] says, “Hey, let’s get them all out on the golf course for a day, and we can get a lot of money for kids with cancer.”

Ryssdal: And he does it really efficiently, too. I mean, really low expense ratio because apparently the Trump Organization is donating the course and the services and all of that.

Alexander: Yeah, it seems that way, although I will say that the expenses in those early years are about what you would expect from a charity golf tournament in general, when you look at what other charities pay for events at Trump courses. And you’re right. It’s a lot of money and low costs in those early years.

Ryssdal: Yeah, and we should say here, just to frame this: Eric Trump has raised overall for St. Jude’s something like $16 million.

Alexander: That’s right. I mean, it’s not like he’s given away a ton of his own money. But regardless, you know, he’s raised a lot of money for a great cause.

Alexander: You know, in 2011, you see the expenses of the tournament triple. And so we asked around to see, well, how does that happen if you have a similar event? What’s going on? Why are the expenses going up so much? And two people, one of which was a guy who used to work at the club, said basically Donald came in and directly commanded that the foundation begin paying his club.

Ryssdal: There is, in this piece, a payment of $100,000 from the Donald J. Trump Foundation — that is the father’s philanthropic arm — to the Eric Trump Foundation, that then winds up going to the Trump Organization. Explain that.

Alexander: Yeah, basically, it was a business deal. It looks like they just came to an agreement and said, “Hey, look, we’re going to start charging you. But don’t worry, it’s all good because, in turn, I’m going to make a donation from my own foundation.” There’s one catch here, though, and that’s that the money in the Donald Trump Foundation at the time was not his own money. And so what he was doing was taking money that other people had donated to his foundation and then giving it to his son’s foundation with the understanding that his son would then hold an expensive golf tournament at his club.

Ryssdal: This is probably an opportune time to ask you to define self-dealing under the law and philanthropic statutes.

Alexander: Yeah. You see donations coming from the Eric Trump Foundation, and then that year or the next year, you see these charities holding very expensive events of their own at Donald Trump golf courses. It looks like, basically, altruism as business development.

Ryssdal: So acknowledging once again that Eric Trump has done huge amounts of good for St. Jude’s, what’s the moral of the story?

Alexander: Well, I think the moral of the story is, here’s a guy who graduates from college with good intentions. And for a few years, they’re doing great things. And then his father gets involved. And then you see a lot of the practices and principles that the charity was founded on sort of start to dissipate. During the election, right after the election, they said that they were going to suspend the operations of the charity. This is a charity that in its original form, it’s hard to imagine anyone taking issue with it. So they could have been spewing millions of dollars again and again, year after year, to St. Jude’s children’s hospital, and instead you have this tragic situation where they shut it down. St. Jude gets dragged into negative coverage. And it’s just a sad story of good intentions that turned into something much different.