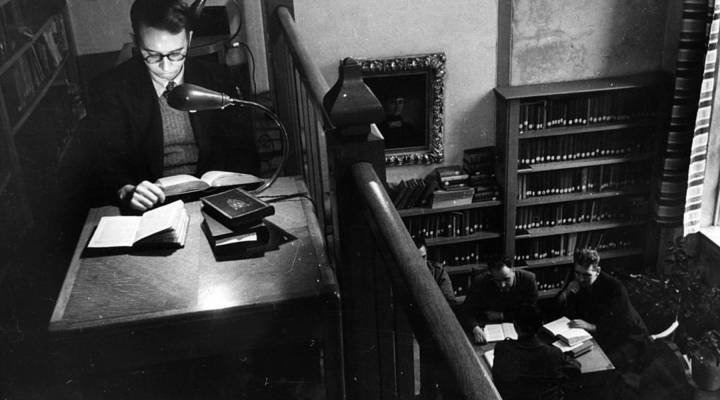 Hulton Archive/Getty Images
Make Me Smart With Kai and Molly

We started kicking the tires on a Make Me Smart book group a couple weeks ago, and today we’re making it official.

You’ve sent Kai and Molly a ton of recommendations, and we talked about a few on this week’s episode. Now comes the important part: We want to know what you want to read! Find a rundown of the options below and cast your vote here.

“The Man in the High Castle” by Philip K. Dick

This alternate-history novel inspired the Amazon series of the same name. It posits Axis powers won World War II, and America is split between German and Japanese rule. Now, if you’re familiar with the TV show — Kai is a big fan — get ready for something a little more low key. Amazon added a lot of violence and narrative wrinkles, while Dick takes a lighter touch.

As Aaron Bady noted in The New Yorker, this book contains some uncomfortable parallels to America in 2017. Over the past year, white nationalism has strutted into mainstream political conversation via the so-called alt-right, and its figurehead is a close adviser to the president. Following Trump’s victory, a prominent backer floated WWII-era Japanese internment camps as precedent for a “Muslim registry,” and a prominent white supremacist was punched out in the street.

It’s not “The Man in the High Castle,” not even close, but it’s not nothing. Whether that makes Dick’s novel more or less interesting is kind of up to you.

“The Righteous Mind: Why Good People Are Divided by Politics and Religion” by Jonathan Haidt

This would make an interesting companion to our conversation with George Lakoff from a couple weeks ago. Lakoff suggested a different way of looking at Trump supporters and political identity in general: as an extension of moral systems instilled in us by family. Haidt strips most reason out of politics with psychology too, but his thinking is almost a specific rebuke of our “Your brain on Trump” episode. From the New York Times book review:

The usual argument of these psycho-­pundits is that conservative politicians manipulate voters’ neural roots — playing on our craving for authority, for example — to trick people into voting against their interests. But Haidt treats electoral success as a kind of evolutionary fitness test. He figures that if voters like Republican messages, there’s something in Republican messages worth liking. He chides psychologists who try to “explain away” conservatism, treating it as a pathology. Conservatism thrives because it fits how people think, and that’s what validates it. Workers who vote Republican aren’t fools. In Haidt’s words, they’re “voting for their moral interests.”

You guys had a lot to say about this particular episode, so Haidt could give us a different perspective and keep that conversation going.

“The Other Wes Moore: One Name, Two Fates” by Wes Moore

Entrepreneur and author Wes Moore was just appointed CEO of the New York City charity Robin Hood, making it a good time revisit his sort-of memoir “The Other Wes Moore.” In it, Moore contrasts his success to another man with the same name and similar background who is serving a life sentence for murdering an off-duty cop. Moore made frequent visits to the other Wes in prison and interrogated his own past to try to figure out how their paths diverged.

“This New Ocean: The Story of the First Space Age” by William E. Burrows

No, the other one. “This New Ocean” is journalist William E. Burrows’ history of the Space Race. Drawn from 175 interviews, it was a Pulitzer Prize finalist following its release in the late 1990s. With recent advances in privatized space travel and President Trump’s assertion that “American footprints on distant worlds are not too big a dream” — not to mentioned renewed tensions with Russia — it might be a good time to dust this book off.

The first chapter, which you can read in full here, is lyrical, huge in scope and kind of irresistible:

When the history of this century is written, the story of mankind’s first breaking gravity’s relentless hold and touching places beyond Earth will be one of its most exciting and important chapters, together with the development of the computer, the discovery of the genetic code and the engineering that soon began to follow, and only a handful of other remarkable advances. The story of the first space age is set in a cauldron whose soup is laced with altruists and scoundrels, visionaries and parasites, heroes and knaves. It is the story of political ideologies that fought relentlessly above the atmosphere, as they did on the planet beneath it, in a dangerous duel for a global supremacy that was more illusion than serious possibility. Using space to help humanity communicate, forecast the weather, and accomplish other beneficial things, and traveling there for the ultimate adventure and refuge, was the central core of the idea. It was the great philosophical driving force, the engine, that seemed to make a presence in space imperative.

“All the Single Ladies: Unmarried Women and the Rise of an Independent Nation” by Rebecca Traister

We had New York Magazine’s Rebecca Traister on during the election to talk about Hillary Clinton, and we got at some ideas she explores in her book “All the Single Ladies.” The book won raves last year for its exploration of independent womanhood through historical analysis, personal reflection and conversations with single women in all sorts of circumstances. Staying single has different economic, social and political benefits or consequences for different types of people, and not every woman has seen her options expand at the same rate.

So that’s the list for round one! Don’t forget to vote, and watch this space for our selection.