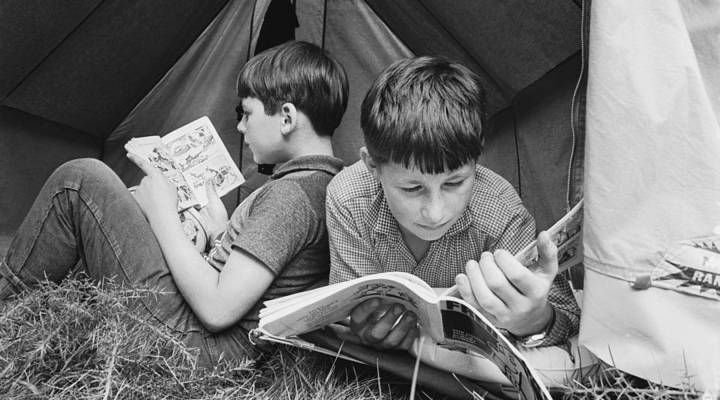 Jonathan Haidt’s “The Righteous Mind” is important for our times, but it was pretty dense. For this round, we’ve tried to make everything a little more readable while sticking to our wheelhouse. Here are the nominations for this round: one pick by the each of the folks behind “Make Me Smart” and two listener picks.

Make Me Smart producer Jennie Josephson picked a brand-new book on racism and policing. Butler, a former federal prosecutor, describes a criminal justice system where “the police, as policy, treat African-Americans with contempt.” That system, he writes, is working as intended and reforms will not come easily.

We’ve talked a lot on the podcast about this administration’s “law and order” platform and a return to the 1980s war on drugs-era policies. We heard from a lot of readers saying “The Righteous Mind” identified a lot of problems but didn’t suggest solutions. This pick does both.

Molly’s pick won the Pulitzer Prize for fiction back in 2013, when North Korea wasn’t quite the geopolitical specter it is today. Thompson’s book follows an everyman named Jun Do who serves Kim Jong Il’s dictatorship, then is imprisoned by it, before finding love and redemption within it. Here’s how outgoing New York Times book critic Michiko Kakutani lauded the book:

In recounting Jun Do’s peregrinations, Mr. Johnson does an agile job of combining fablelike elements with vivid emotional details to create a story that has both the boldness of a cartoon and the nuance of a deeply felt portrait. He captures the grotesque horrors that Jun Do is involved in, or witness to, even as he gives us a visceral sense of the world that his characters inhabit…. In making his hero, and the nightmare he lives through, come so thoroughly alive, Mr. Johnson has written a daring and remarkable novel, a novel that not only opens a frightening window on the mysterious kingdom of North Korea, but one that also excavates the very meaning of love and sacrifice.

“Everybody Lies: Big Data, New Data, and What the Internet Can Tell Us About Who We Really Are” by Seth Stephens-Davidowitz

This suggestion, from listener Karen Collett, is probably the most similar to “The Righteous Mind.” It’s all about how we relate to each other and how private thinking affects our public selves. But Stephens-Davidowitz, a former Google data scientist, isn’t plumbing our brains, he’s looking at our search history.

“I think there’s something very comforting about that little white box that people feel very comfortable telling things that they may not tell anybody else about: Their sexual interests, their health problems, their insecurities,” Stephens-Davidowitz told NPR’s “Hidden Brain” podcast. “And using this anonymous aggregate data, we can learn a lot more about people than we’ve really ever known.”

His prose is academic, but a little more accessible than “The Righteous Mind.” Here’s an excerpt from Wired.

“The Man in the High Castle” by Phillip K. Dick

This is Kai’s pick, and the only returning option for this round. Here’s what we said about it last time:

This alternate-history novel inspired the Amazon series of the same name. It posits Axis powers won World War II, and America is split between German and Japanese rule. As Aaron Bady noted in The New Yorker, this book contains some uncomfortable parallels to America in 2017. Over the past year, white nationalism has strutted into mainstream political conversation via the so-called alt-right, and its figurehead is a close adviser to the president. Whether that makes Dick’s novel more or less interesting is kind of up to you.

“Destiny of the Republic: A Tale of Madness, Medicine and the Murder of a President” by Candice Millard

James A. Garfield has the unfortunate distinction of being the least-interesting president to be assassinated. That’s in part because he didn’t do much in office, and in part because the assassin’s bullet didn’t really kill him. As Millard lays out in her biography of the 20th president, Garfield was more or less tortured to death by quack doctors who didn’t wash their hands or keep rats out of the sick house.

It’s a grim ending for someone who rose out of poverty to the presidency, and it makes Garfield’s story something of a semi-obscure American tragedy. Think of this pick as “Hamilton,” but with less music and more surgery scenes out of “The Knick.” It was suggested to us by listener Tracey Stewart.

You can read an excerpt about Garfield’s assassin right here.