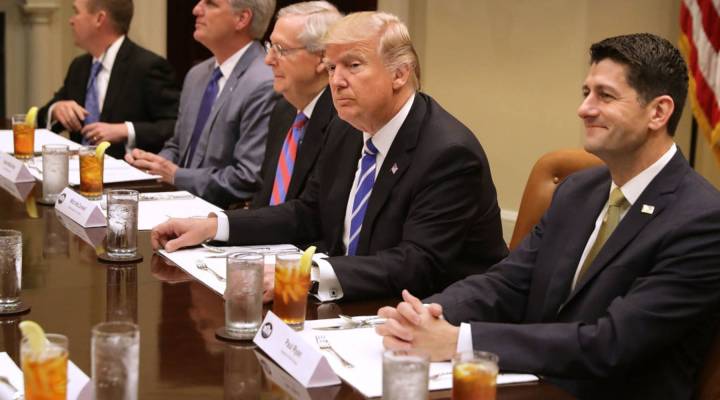 The timeline for President Trump’s tax reform keeps getting pushed back. First, it was mid-March. Then, by August at the latest. Now, we may be lucky if we see a plan by the end of the year. Convincing Republics in the House, Senate and White House to get on the same page is tough, if the stalled-out health care bill is any indication. Convincing Democrats to get on board could be an even tougher order. But, according to a recent Wall Street Journal article by Jason Furman, it could also be the only option for meaningful tax reform. Furman is a senior fellow at the Peterson Institute for International Economics; before that, he was the last chairman of the Council of Economic Advisers in the Obama White House. Furman spoke with Marketplace host Kai Ryssdal about how the Trump administration might build a bipartisan tax reform coalition. Below is an edited transcript of their conversation.

Kai Ryssdal: So we’ll get to the economics of this thing in just a second. But help me understand why it’s economically important that this be a bipartisan tax reform bill, in your mind.

Jason Furman: It’s related to the economics. Which is, we have a tax system that has just accumulated more and more issues over time. Our problem is not that we’re taxing too much, so we can’t solve our problems with the tax cut. We need to solve it with a tax reform where you get rid of a lot of loopholes, and you can use some of that money to lower tax rates. That inherently has winners and losers. The losers like to organize, and I think the only way you could defeat those losers is by getting a coalition of the winners. And that would be a bipartisan coalition.

Ryssdal: You want Congress and the White House to get together and do business taxes first, or, in fact, only, in your piece. How come? Why not tax cuts and tax reform for consumers and all the rest of us?

Furman: Ideally, you do everything. But I think the real economic benefits come on the business side. Our statutory tax rate on the business side is out of step with the rest of the world. We have the highest statutory tax rate of any country. And it matters because businesses can choose where to locate, where to move their headquarters; we’ve been seeing all of these corporate inversions as American companies move overseas. They choose where to report their profits. That’s why you see so many profits reported in some of the lovely tropical islands spread throughout the world. And that’s why, on the business side, how you compare to everyone else matters. The individual side, less so. You’re not going to pick up and move just because the tax rate is a little bit higher here than it is somewhere else. And, in fact, our tax rate on the individual side isn’t really higher than it is elsewhere.

Ryssdal: You mentioned that you think infrastructure ought to be in here. Is that because, basically, the only area that Republicans and Democrats might even seem to agree nowadays in public policy is the need for infrastructure investment?

Furman: There’s no logical link. You don’t need to do infrastructure as part of tax reform. But it’s something that President Obama put out as an idea. It’s something that the Republican, then-chairman of the Ways and Means Committee Dave Camp put in his plan as well. So there’s been a lot of bipartisan interest, not just in infrastructure in general, but linking it to taxes. I think taking two ideas that will be good for our economy and doing them together is even better for our economy than doing either one alone. And I think for a political perspective, infrastructure brings you certain votes. It brings you certain people that might not have been enthusiastic just about the tax reform part of all of this.

Ryssdal: One of the reasons that health care reform foundered and is currently languishing is that the White House and congressional Republicans couldn’t get themselves on the same page. And now we’ve got competing tax plans in both the White House and in Congress. Does it matter where this thing starts, or do you just think they need to get in a room and figure this out?

Furman: I don’t think this can happen without presidential leadership. And right now, from my reading of the newspaper, there’s about three different plans floating around within the administration. All three of them are different from what House Republicans are talking about. And the main thing Senate Republicans have said is they don’t want to do what the House Republicans want to do. So there’s people all over the map right now. Presidential leadership would be required. And, you know, the type of leadership I’d like to see isn’t how do we cram tax cuts down the throat of Congress with Republican-only votes? It is, how do we open up a conversation that, instead of trying to make sure we don’t lose three Republicans in the Senate, how do we add 30 Democratic votes in the Senate?