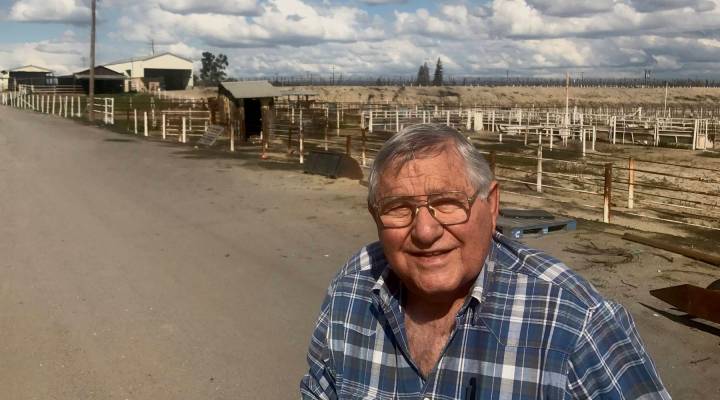 COPY
John Paboojian Jr. owns about 450 acres of raisin vineyards in Fowler, California, and has been working the land for 75 years. Andy Uhler/Marketplace

John Paboojian Jr. owns about 450 acres of raisin vineyards in Fowler, California, and has been working the land for 75 years. Andy Uhler/Marketplace
Listen Now

There’s a town outside of Fresno, California, named Selma. Its official motto is “Raisin Capital of the World.” For many families, raisin farming is the only thing they know how to do. But with falling prices and more foreign competition, many farmers are struggling to keep their farms afloat.

John Paboojian Jr. celebrated his 80th birthday three days before I met him at his farm a few miles from Selma. Paboojian owns about 450 acres of raisin vineyards in Fowler, California, and he’s been working the land for 75 years.

“I remember when I was about 4 or 5 years old, my grandfather had 60 acres across the street from my dad,” he said. “They’d put me on the tractor, and all I did was steer it. I could stop it, and then Grandpa would get on it, turn it around and put it in another row.”

Back then, his grandparents needed all the help they could get. They picked the crop entirely by hand. That land is still in family.

As demanding as managing his farms turned out to be, Paboojian didn’t limit himself to raisins.

“I would do the farming during the week, and on the weekends, I was at rodeos,” he said. He competed as a calf roper. Apparently, a pretty good one.

“I was runner up in ’69. I ended up second in the world that year,” he recalled.

Paboojian said he quit roping at rodeos 10 years ago. (Seems that calf roping is more for the under-70 crowd). He told me he could still do it, though. But he’s busy and spends most of his time on the farm. His pickup truck is a makeshift office.

He grabbed his keys and told me to get in and drove me around the property. At one point, we stopped and he pointed to a pair of farm hands.

“These are two of my grandsons,” he explained. “I’m teaching them, because I just turned 80 and my wife said, ‘If something happens to you, what are we going to do with all this?’”

Not only does he have these farms, but he also owns the American Raisin Packing plant up the road.

For about 15 years, his eldest son, Greg, ran the packing plant. But then Greg decided to go out on his own, selling bird feed at first and eventually getting into selling almonds. The American Raisin Packing plant is up for sale for a few million dollars, but Paboojian said he’ll probably end up giving it to Greg to keep it in the family.

“If he can make it in almonds, that’s fine,” he told me, with a hint of melancholy in his voice. “It won’t be a raisin plant any more. The raisin industry is depressed.”

Paboojian understands the reality and recognizes that nostalgia won’t pay the bills. Raisin farmers and the packers who sell their produce settled on a price last month for last year’s crop: $1,100 per ton, down 31 percent from the year before.

“All these farmers, they’re pulling them out now because they can’t make it,” Paboojian said.

Labor costs and government regulations are two things farmers in California and throughout the nation are struggling with. There are also foreign competitors, like Turkey, which can sell raisins much cheaper. Many raisin farmers are pulling up their vineyards and turning to crops like almonds, pistachios or clementines where there’s more money to be made. Or they’re just selling the land.

Kalem Barserian, CEO of the Raisin Bargaining Association, said he doesn’t blame them for giving up.

Paboojian won’t hear any of that talk. He said he feels confident about the future of his farms and feels like he built something that’ll last.

“Do I consider it a success? Yeah,” he said. “When you got a thousand acres and you’re bringing in a million-dollar crop every year, you got to be successful when you do that.”

Paboojian would love it if his grandkids could make a go of it as raisin farmers. But he’s realistic and is advising them not to.