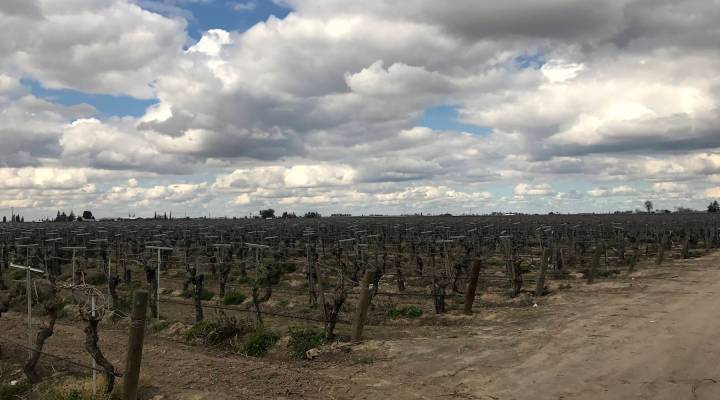 If you drive north on Highway 5 from Los Angeles, in about an hour you’re going to start seeing a lot of farmland. About halfway between LA and San Francisco, you’ll run into Selma, California, population 24,000. There’s a typical town square downtown where you’ll find the Chamber of Commerce.

Robert Allen, the chamber’s executive director, was born in Selma and has lived in town for 72 years.

“We’re very proud of the fact that we still produce raisins and can call ourselves the raisin capital of the world,” he said.

Allen wasn’t just using the tag as a way to describe an industry that’s been important to the town. It’s Selma’s official city motto and is on billboards as you enter and exit the city limits. But, he said, thing are different these days.

“It used to be that 20-acre farms would provide enough support for a family that they didn’t have to do anything else,” he said. “But most of the smaller farmers probably have jobs outside the farm just to maintain it.”

Part of the problem is raisin farmers don’t get as much as they used to for their produce. There is still 165,000 acres of farmland dedicated to raisin grapes in the San Joaquin Valley, but that’s nearly half what it was 15 years ago.

Last month, farmers and the packers who take the raw produce and get them ready for retail sale agreed to a price of $1,100 a ton for the 2016 raisin crop, down 31 percent from last year.

“They can’t make it at $1,100,” said John Paboojian, who owns about 450 acres of farmland himself and also owns a packing company called American Raisins. “All these farmers, they’re pulling them out now because they can’t make it.”

A crate of raisins from American Raisins, a California company owned by John Paboojian.

Paboojian said he’s not worried about his operations. He turned 80 in February and he’s been farming since he was 4. He said a century ago, when his grandfather started the business, farmers didn’t have to worry about regulations on things like the chemicals they use and what they paid workers. They do now.

“Two things that are hurting the farmer over here are regulation and labor,” he said. “Our labor just keeps going up every year, and there’s no end to it.”

For the first time, California won’t be the world’s leading producer of raisins. Turkey is set to take that honor as the raisins it produces are cheaper for packers to buy than the ones from California.

Watch the raisin-packing process below:

Raisin production from Marketplace on Vimeo.

More and more, farmers in the San Joaquin Valley are pulling up their raisin vineyards and planting more profitable crops like almonds or clementines.

Kalem Barserian, CEO of the Raisin Bargaining Association (the guy who negotiated that price for last year’s crop), has worked in raisins for more than 50 years. He said he loves it, but he wouldn’t advise his friends to stick it out under these conditions.

Barserian said the big farmers are going to snatch up that land and get bigger. That’s more efficient, but no consolation for the little guys, the individual families who have been farming this land for more than a century.