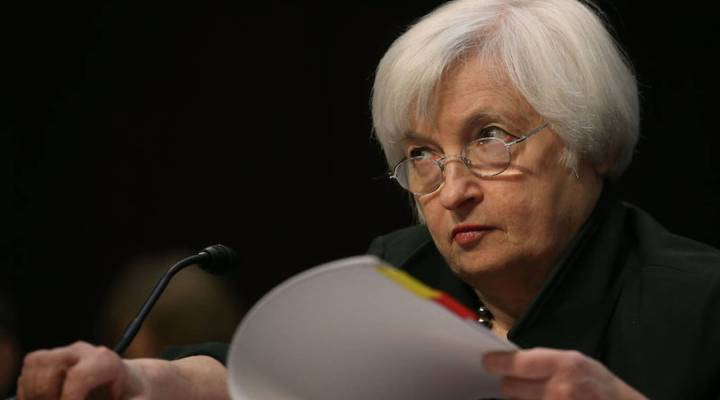 Janet Yellen, chair of the Federal Reserve‘s Open Market Committee, took the stage this afternoon in Washington, D.C., to answer questions about the Fed’s decision to raise interest rates for the third time since the 2008 financial crisis.

At times, Yellen has taken time during her public appearances to explain to the American public, journalists and even lawmakers what the Fed actually does and what really is up to the U.S. Congress. This has not escaped notice of some lawmakers, including Ohio Sen. Sherrod Brown.

“As you have from time to time mentioned — ‘exhorted’ is maybe too strong a word — that Congress needs to do a better job in terms of investment in public works and infrastructure, also you have made comments from time to time about job training,” Brown told Yellen during one of last year’s hearings, asking for further instructions.

To which Yellen frankly responded: “Well, I am not going to give you detailed instruction. I think this is up to Congress to decide.” She did go on to say that among the things that Congress should focus on is creating an environment that fosters innovation, research and development and leads to creation of new businesses and firms.

Here are few other things the Fed considers its job and what it does not, as told by Yellen:

How does the Fed know what small business owners are thinking?

The Fed often meets with certain groups to determine their outlook about the U.S. economy. Here is what Missouri Rep. Blaine Luetkemeyer asked Yellen when she testified in front of the U.S. House of Representatives in February:

According to her testimony, Yellen met with small business owners several weeks prior to the hearing. One group she had not recently spoken to: farmers.

Did the Fed learn anything from the 2008 financial crisis?

“Consumer abuses in the mortgage securitization areas played a key role in the [2008 financial] crisis. The Federal Reserve, at that time, had responsibility for enforcement of these regulations and, in retrospect, I wish the Fed had acted more aggressively and earlier to address those abuses,” Yellen said in February. “We have certainly learned from the financial crisis that it’s critical to monitor this area and the potential for deceptive practices in consumer lending to create a financial crisis or financial stability issues.”

On Wednesday, Yellen told reporters that consumers and businesses alike are still cautious about their spending. That is one of the effects of the 2008 financial crisis.

“One form of headwind, I think, has been caution, restraint and risk aversion on the part of households and businesses that’s held back spending decisions. I suppose my judgment that it’ll move up over time reflects the notion that part of that will gradually dissipate over the years,” she said.

Does the Fed discuss politics?

When asked by a Wall Street Journal reporter in September 2016 whether she had a response to Trump’s claims that the Fed kept interest rates low to support the Obama administration, Yellen explained that the Fed is an independent agency.

“I think Congress very wisely established the Federal Reserve as an independent agency in order to insulate monetary policy from short-term political pressures. And I can say emphatically that partisan politics plays no role in our decisions about the appropriate stance of monetary policy,” she said. “We are trying to decide what the best policy is to foster price stability and maximum employment and to manage the variety of risks that we see as affecting the outlook. We do not discuss politics at our meetings, and we do not take politics into account in our decisions.”

Yellen acknowledged today that she had recently met with President Donald Trump and his Treasury Secretary Steven Mnuchin.

“I’ve met a couple of times with the treasury secretary, and I am getting to know him. It’s traditional for Fed chairs and Treasury secretaries to meet on a regular basis, and I fully expect to have a strong relationship with Secretary Mnuchin. We’ve had really good discussions about the economy, our regulatory objective, about the work of the FSOC, global economic developments. I look forward to continuing to work with him,” she said.

“I was introduced to the president. I had a really brief meeting and appreciated that as well.”

So does the Fed know what impact Trump’s policies will have on the U.S. economy?

Not really. Yellen told reporters that fiscal policies “could potentially affect the economic outlook. Of course, it is still too early to know how these policies would unfold. Fiscal policy is only one of many factors that could influence the outlook.”

The fact that the Fed had not updated its economic outlook since the presidential election signals that the central bankers are waiting for the administration to roll out and implement specific policies rather than making their decisions based on campaign promises and rhetoric.

Will the repeal of the Affordable Care Act affect the Fed or its decisions?

When she appeared before the U.S. Senate on Valentine’s Day, Yellen was asked by New Jersey Sen. Bob Menendez if she was concerned about the effects that repealing the Affordable Care Act might have on the economy and the labor market.

The Fed would have to look at the impact health care shifts would have on the economy, Yellen said.

“Health care does account for a very significant share of spending, and a loss of access to health insurance could have a significant impact on spending of households for other goods and services, beyond health care itself,” she added. “Access to health care has, for some individuals, increased their mobility and diminished the phenomenon called “job lock,” where people are afraid to leave jobs because of losing health insurance, and that could have implications for the labor market as well.”