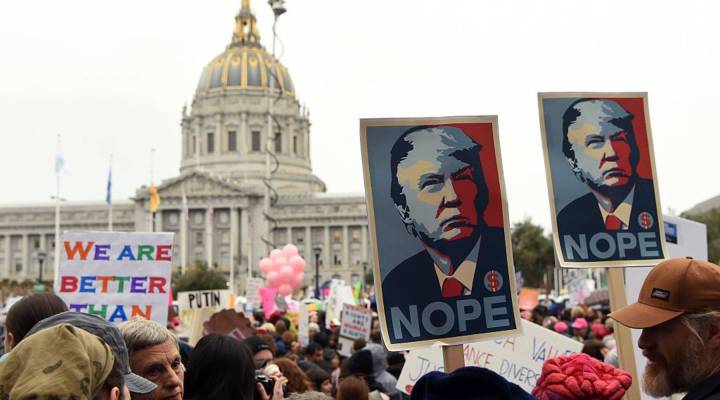 COPY
Thousands of people gather at San Fransisco's City Hall to protest President Donald Trump on January 21, 2017. Thousands protested across the state of California the day after Trump was inaugurated. JOSH EDELSON/AFP/Getty Images

Speaking with Bill O’Reilly on Fox before the Super Bowl, President Donald Trump said California was, “in many ways out of control.” But he said he didn’t want to defund anybody.

“I want to give them the money they need to properly operate as a city or a state,” he said. “If they’re going to have sanctuary cities, we may have to do that. Certainly that would be a weapon.”

There are many other things on which the president and California officials disagree, like climate change. Trump has called it a hoax. California has some of the strictest emissions regulation in the country and Gov. Jerry Brown is in no mood to back down.

“We’ve got the scientists. We’ve got the universities. We have the national labs. And we’ve got the political clout and sophistication for the battle,” he told the American Geophysical Union in San Francisco last December.

Plus, California is a wealthy state. If it were a country, it would be the world’s sixth largest economy. Jill Gonzalez, an analyst at the personal finance website, WalletHub, said California can afford to resist the federal government more than most states.

“California is really not too dependent on the federal government,” she said. “It ranks about 46th, so it’s definitely in that bottom five.”

Many Californians support the state’s resistance. Businessman Oliver Sicat was working at a coffee shop in downtown Los Angeles and said he doesn’t like the idea of losing federal funding, but he trusts what the legislators in the state are doing.

“I think that it’s great that our state is sticking up for certain things that we believe are in the interest of our citizens of California,” he said.

Others disagree. Steven Greenhut works at the conservative-leaning R Street Institute in Sacramento. He said he was embarrassed Governor Brown called on the federal government to help repair the damaged Oroville Dam in the north of the state.

“If you’re going to defy the guy and use the kind of rhetoric he’s using and then you have to say, ‘oh, excuse me, can you send more money?’ It’s bizarre,” he said.

Beyond the threat of less federal funding, Gonzalez said new immigration policies and a strained U.S. relationship with Mexico could hit California economically.

“Might it have to become a little bit more reliant on federal funds in the future? Maybe,” she said.

Big cities like San Francisco and Los Angeles will likely weather the storm if federal dollars don’t materialize. But other cities and towns in California might not — some of them are still trying to pick up the pieces after the financial crisis.