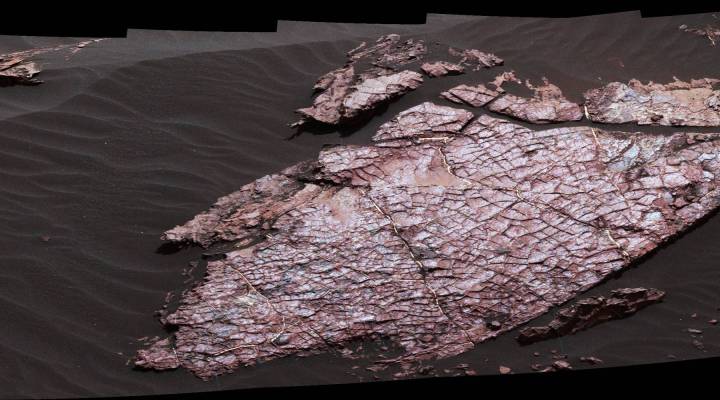 COPY
This view of a Martian rock slab called "Old Soaker," which has a network of cracks that may have originated in drying mud, comes from the mast camera on NASA's Curiosity Mars rover. NASA

This view of a Martian rock slab called "Old Soaker," which has a network of cracks that may have originated in drying mud, comes from the mast camera on NASA's Curiosity Mars rover. NASA
Listen Now

The Mars rover Curiosity recently discovered what may be mud cracks on the surface of the planet — evidence that water existed on Mars billion of years ago.

The rover examined what looked like “slabs of rock cross-hatched with shallow ridges,” in an area called “Old Soaker,” according to NASA. These could be the first mud cracks confirmed by Curiosity, but the rover previously found evidence of ancient lakes on Mars in 2015.

Nathan Bridges, co-investigator from the mission, spoke with Marketplace’s Mark Garrison about the Curiosity’s latest discovery and what it’s like to work on Martian time. Below is an edited transcript.

Mark Garrison: So, how big a deal are these new discoveries?

A screenshot of the Mars Science Laboratory time converter that NASA scientists use to change Mars time to Earth time.

Nathan Bridges: I think they’re pretty important. We’ve known that water was present on Mars in its ancient history, but these are very good confirmations that we had long standing bodies of water, like lakes, and then they dried up — the mud at the bottom of the lake cracked, forming the cracks we see in the surface.

Garrison: So looking at the cracks, and new information, what does that tell us about what the area looked like around 3 billion years ago?

Bridges: In some respects, it’d be similar to Earth — maybe Earth in a desert — where it’s dry and yet you do have lakes, and as in a desert, the lakes don’t stay yearlong, but eventually these lakes dried up. We can’t say for sure that there was life on Mars, but we do know that water is fundamental to the evolution of life as we know it. Better we can understand that, as revealed in the ancient rocks we’ve looked at — better we can understand the possibilities of that there could have been environments conducive to life on Mars.

Garrison: Now, we understand that you don’t drive the rover at night, and of course the Mars day is a little different than here on Earth. You mentioned before that you and your team have to work a “Martian day.” How does that work out?

Bridges: When we were first getting started, we did live on a Martian day. The Mars day is about 40 minutes longer than Earth’s day, so each work day of the week on Earth, we would start it 40 minutes later. You can imagine, you would start out at a normal time, say 9 a.m., but after a few days you’re working quite late at night. So that was challenging, albeit it was fun because it was new and exciting.