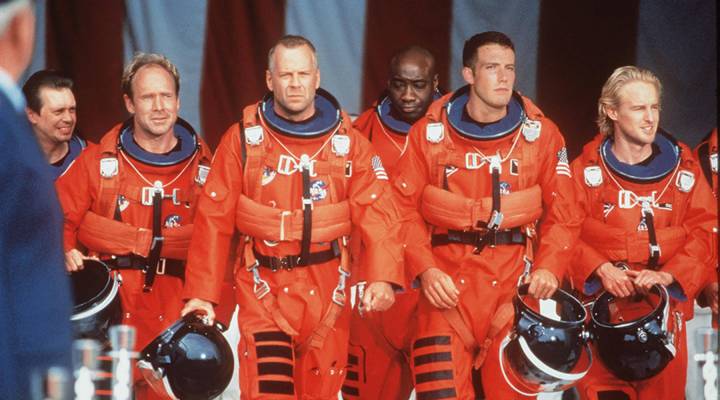 COPY
From left, Steve Buscemi, Will Patton, Bruce Willis, Michael Duncan, Ben Affleck, and Owen Wilson are on a mission to save Earth from an asteroid in “Armageddon.” Getty Images/Handout
Marketplace Tech Blogs

From left, Steve Buscemi, Will Patton, Bruce Willis, Michael Duncan, Ben Affleck, and Owen Wilson are on a mission to save Earth from an asteroid in “Armageddon.” Getty Images/Handout
Listen Now

This summer, Marketplace Tech is exploring tech in movies. Today, we’re looking at the Bruce Willis classic “Armageddon,” which was the highest-grossing film of 1998. That was 20 years ago, and fans still love the movie today. Willis’ character, Harry Stamper, is a “deep core” oil driller sent into space to drill a hole and drop a bomb in an asteroid that is hurtling toward Earth. We meet Harry on an offshore oil rig, managing a surly crew, with oil flying everywhere. It’s a depiction of oil-drilling life that has stuck with the public, but has very little to do with reality, says Eric van Oort. He’s a professor of petroleum engineering at the University of Texas. Amy Choi talked to van Oort about the space drilling technology in “Armageddon.” The following is an edited transcript of their conversation.

Eric van Oort: When I meet new people and tell them I’m a drilling engineer, nine times out of 10, people bring up “Armageddon.” And then I have to tell them it’s not at all like Harry Stamper’s rig — a complete mess, and there are safety violations all over.

Amy Choi: Did “Armageddon” get anything right?

Van Oort: Not much. Even the science behind blowing up the asteroid is not accurate. You need a hydrogen bomb that’s about a billion times bigger than the biggest hydrogen bomb that was ever created. What it did get right is that we’re going to be drilling on asteroids, drilling on comets. That is humanity’s future, I’m pretty convinced of that.

Choi: What are we hoping to find?

Van Oort: Well, we’re hoping to find water on Mars. And the entrepreneurs have gotten into this as well, and they’re interested in precious metals, kind of mining asteroids. So there’s very serious work ongoing by several parties to go after asteroids and mine gold and platinum and other elements.

Choi: What kind of drilling technology is in space right now?

Van Oort: Well, your listeners might not know this, but we’ve been drilling in space for quite some time. The original moon missions with the Apollo landings, they had drills on board to get rock samples on the moon, and the Curiosity rover, until recently, was drilling into Mars.

Choi: Obviously in “Armageddon,” we’re looking at space travel under extreme duress. How would you stop a Texas-sized asteroid headed to Earth?

Van Oort: I don’t know if I could. I don’t think there is a viable strategy to divert it away from Earth. Luckily these are rare events. The last asteroid that hit the Earth and killed the dinosaurs was 60 million years ago. So let’s hope it doesn’t happen in our lifetime.