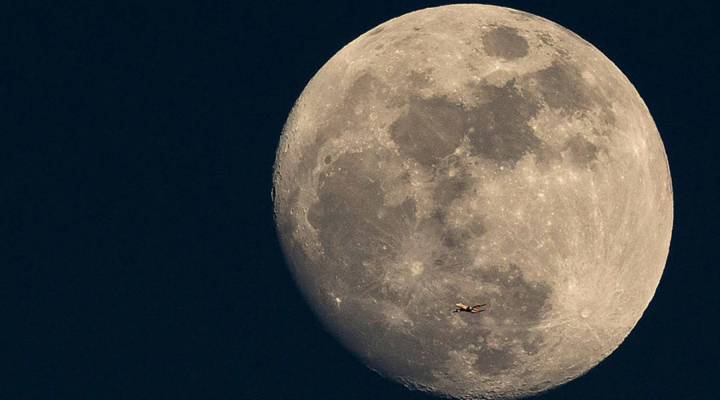 COPY
A plane flies past the moon at sunset on March 3, 2015, in London. Dan Kitwood/Getty Images
Marketplace Tech Blogs

A plane flies past the moon at sunset on March 3, 2015, in London. Dan Kitwood/Getty Images
Listen Now

A lot of research went into Andy Weir’s book “The Martian,” about an American astronaut who gets stranded on Mars alone in the year 2035. He studied orbital mechanics, astronomy, and the history of spaceflight to write something as realistic as possible. The book was later made into a movie staring Matt Damon.

Weir’s new book, “Artemis,” took just as much research. In it, he imagines what day-to-day life would look like in the first and only city on the moon through the story of a 20-something petty criminal whose attempt at a big-time heist goes wrong. Marketplace Tech host Molly Wood talked with Weir about how the technology and the economy in “Artemis” took shape. Below is an edited portion of their conversation.

Molly Wood: Do you think you nailed the science in “Artemis” as well as you did in “The Martian”?

Andy Weir: I would say it’s even more accurate than “The Martian.” The actual design of the city itself and the way everything works from how the power is managed to how heat rejection works to how they built the city — all that stuff is accurate to modern-day science.

Wood: Did you crowdsource any of the science?

Weir: No, I didn’t. In “The Martian” the best way to put it is I crowdsourced the fact-checking. I know scientists and researchers and astronauts and NASA personnel and all these really awesome people, and any of them would be happy to answer my email, and they’re all subject-matter experts. But still, I just used Google because the space world is incredibly well documented. People who work in the space industry are very proud of it. They like to talk about it. They like to post things online about it. They’re technically savvy, so they know how to post things online. And there’s very little in the way of industrial military secrets.

Wood: A lot of the technology in this book is sort of, no pun intended, down to earth. Like it’s welding and fiber-optic cables and heat dispersion. And the only sort of futuristic consumer tech is that everybody has the same smartphone apparently. I mean, is space tech just less sexy than we think it is?

Weir: I just tried to figure what would life be like. You’re a metal worker and you live on the moon. Well, what’s your life like? What do you do? What do you eat?

Wood: And what attracted you to the idea of a colony?

Weir: I said, “What will mankind or humanity’s first, non-Earth city look like and be like, and where will it be?” And I had stories in mind about the beginnings of “Artemis,” like the very first people who go there and build it, the founding astronauts so to speak. But I don’t know, those stories weren’t as interesting to me as the idea of “Artemis” has now been around for 20 years, and here’s some cool stuff going on and it’s all very-well established. It’s the rule of cool. You gotta go with the thing that’s neatest.

Weir will speak more about the economics of his fictional moon colony on today’s episode of our podcast Make Me Smart.