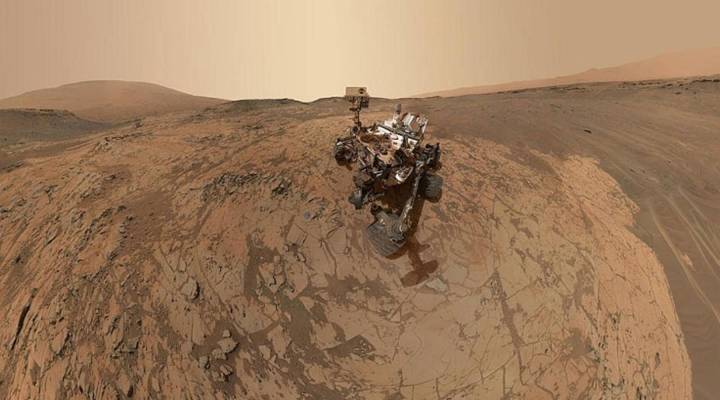 COPY
This self-portrait of NASA's Curiosity Mars rover shows the vehicle at the "Mojave" site. Photo by NASA/JPL-Caltech/MSSS via Getty Images

This self-portrait of NASA's Curiosity Mars rover shows the vehicle at the "Mojave" site. Photo by NASA/JPL-Caltech/MSSS via Getty Images
Listen Now

“America will take the Giant Leap to Mars.” That’s the title of President Barack Obama’s special guest editorial on CNN this week. In his piece, the president said there are now more than 1,000 companies in the U.S. involved in the business of outer space. Getting humans to Mars, he said, will take cooperation between the private sector and the government.

There’s a good reason the government isn’t planning to send humans to Mars on its own, though it could if it wanted to, said Marco Caceres, a senior space analyst with the Teal Group Corporation, an aerospace and defense market intelligence firm.

The truth is, when it comes to building missions to Mars, the budget is where things get a little awkward.

“I don’t think the government can do it if you’re basically keeping NASA’s annual budget at somewhere between $18-$19 billion a year,” Caceres said. “I think that’s incredibly unrealistic. … This is the problem whenever you talk about a program as ambitious as this,” he continued, “you don’t want to talk money, because, particularly if you’re the government, because it will scare people away. It will scare the public, it’ll scare Congress,” he said.

But there’s been a shift in the landscape of outer space. Companies that helped NASA on its missions used to just be contractors, but now there’s a whole new private market competing to do business in space: companies like SpaceX, Virgin Galactic and Sierra Nevada Corporation and more. Private companies, Logsden said, will be critical to sending humans to Mars.

“It’s not only a private partnership but an international partnership that is actually essential, if humanity is going to begin to travel to Mars in our lifetimes,” he said.

“You have to have the government and private industry working together,” said Dan Dumbacher, a professor of engineering practice at Purdue University’s School of Aeronautics and Astronautics.

Dumbacher, who spent 30 years at NASA and helped lead the space launch system for the Orion mission, noted that NASA has been working with private vendors for years. “Even though a lot of the work was done by government, we still had to have what the major aerospace contractors actually design and build the hardware,” he said.

Dumbacher said don’t forget NASA has been working with private vendors for years.

But whoever is building the equipment for the next mission, Caceres said getting to Mars is going to cost trillions — a number that doesn’t trip off the budgetary tongue. That’s why, he said, when it comes to discussing planning for the trip, it’s always in future.

“That’s precisely why whenever you have an administration,” he said, “they always say, ‘We’re going to go to Mars in 20 or 30 years.”