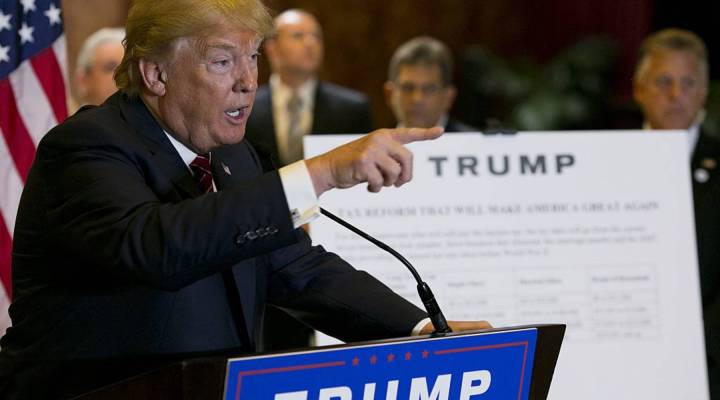 COPY
Donald Trump announcing his tax plan during a press conference at Trump Tower back in September. DOMINICK REUTER/AFP/Getty Images

Who benefits and who loses when the federal tax system gets an overhaul?

New York University professor Lily Batchelder has looked at how Trump’s tax plan might affect the individual’s pocketbook, finding that tax cuts for the wealthy could end up being proportionally larger than those for low- and middle-class families.

Batchelder, also once the deputy director of the National Economic Council, joined us to break down what his plan means for different income brackets.

David Brancaccio: How will it affect our pocketbooks?

Lily Batchelder: Just to go through a couple examples, let’s say you’re a family earning $10,000 to $20,000 — so maybe you’re a full-time minimum wage worker. Under his plan, you’d receive a tax cut on average of $120. Then if you’re lucky enough to be a family earning over a million dollars, your average tax cut would be about $317,000, which is more than 14 percent of your income. So as a share of your income, the tax cut for millionaires is about 18 times larger. But there are also millions of individual families who would see their taxes go up under his plan. Single-parent families would face a tax increase if their income’s between $20,000 and $200,000 according to the Tax Policy Center.

Brancaccio: Now you and I are here looking at the specifics and doing the accounting here. But more broadly, Donald Trump insists that he will tell congressional committees drafting his plan that whatever they do, they’re not allowed to raise taxes for lower middle-income Americans. Maybe that pressure from the bully pulpit will, from the perspective of lower-income Americans, fix this.

Batchelder: So I think it’s very possible that any tax package could fix this problem of tax increases. But it wouldn’t fix the problem that the plan is heavily skewed towards tax cuts for the most wealthy, and that’s the case in the House Republican plan as well. They get three quarters of the value of all of the tax cuts.

Brancaccio: So what do you make of it when you see the person tapped by the Trump team to become the next treasury secretary — Steven Mnuchin was on TV saying there will be no absolute tax cut for the upper class. There will be a big tax cut for the middle class, but any tax cuts we have for the upper class will be offset by less deductions. I mean, that was a pretty stark promise.

Batchelder: It is fundamentally different from what either President-elect Trump or the House Republican plan have proposed. But if they are interested in entirely shifting their plan, I think that would be great to target the benefits on low- and middle-income households.