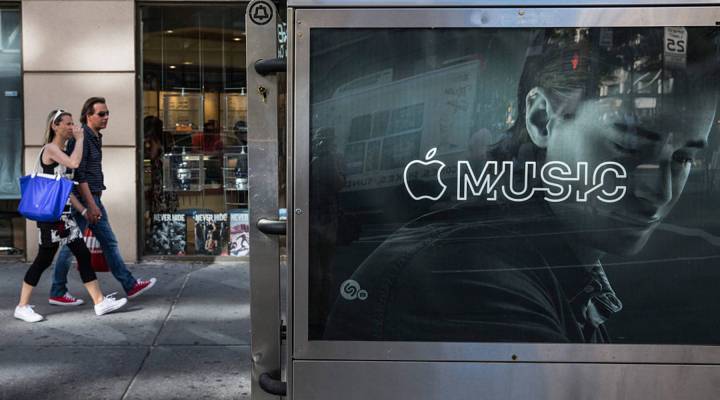 COPY
An advertisement for Apple Music on the streets of Manhattan. Andrew Burton/Getty Images

An advertisement for Apple Music on the streets of Manhattan. Andrew Burton/Getty Images
Listen Now

Any streaming service worth its salt has millions of songs on demand, but the problem is that all of the services out there have the same songs.

Now, to differentiate itself, Apple Music will offer original video.

In 2015, Apple launched it as a $10-per-month streaming service, which quickly became a big competitor with companies such as Pandora and Spotify.

“Apple has a long history of using music an entryway into a new business model or business practice,” said Aram Sinnreich, a communications professor at American University in Washington, D.C.

As the business model shifts away from downloads, Sinnreich said it makes sense for Apple to find new customers through a much broader range of media on demand.

“Get them kind of hooked into your infrastructure and payment system, and have them walk around in your walled garden, and then you hit them with the good stuff,” he said.

If that “good stuff” is, in fact, video, then that sounds a whole lot like Netflix or Amazon.

“Apple may go there someday,” said Ben Bajarin, an analyst at Creative Strategies. “But I think what we’re seeing is perhaps them tip-toeing there and exploring the waters of original video content.”

Apple has already started shooting an original TV series called “Planet of the Apps.” And the company has confirmed that more scripted content is in the pipeline.