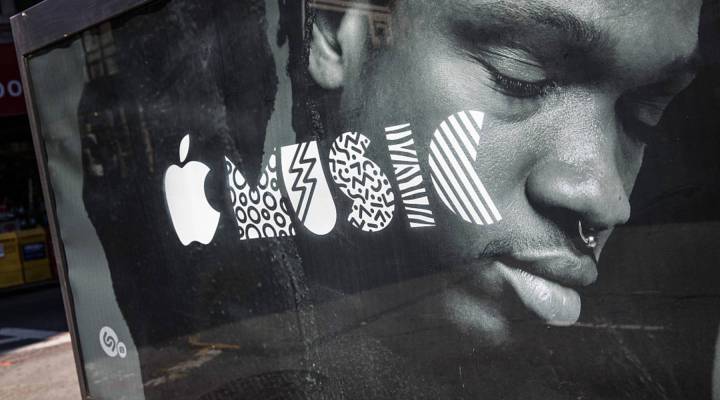 COPY
An advertisement for Apple Music is posted on the streets of Manhattan on August 7, 2015 in New York City.     Andrew Burton/Getty Images

An advertisement for Apple Music is posted on the streets of Manhattan on August 7, 2015 in New York City.     Andrew Burton/Getty Images
Listen Now

The Wall Street Journal reports today that Apple may buy Tidal music streaming service. Tidal is run by Jay Z and it’s considered the most artist-friendly streaming service out there: Rihanna and Beyonce herself are among the artists who’ve released new songs or albums exclusively on Tidal this year.

Meanwhile Apple, the one time music-industry disruptor, is lagging far behind rival Spotify when it comes to subscribers, and it wants to change that.

Apple has gained about 15 million subscribers since it launched its streaming music service last year. Paul Resnikoff is publisher of Digital Music News. He said the digital music scene is “brutal right now.”

“It’s incredibly competitive,” he said. “We’re seeing a massive ramp-up in new subscribers – a lot of early stage growth, a lot of excitement.”

Apple has half the paying subscribers rival Spotify does, though Spotify has many more who listen for free with commercial interruptions.

Tidal only has around four million subscribers, but they get the rights to releases like Beyonce’s hit ‘Sorry.’

Bob Lefsetz is a music industry analyst. “Apple is pursuing a strategy of exclusives to gain market share” over Spotify, he said.

“In other words, if you can only see Kanye’s video on Apple, as opposed to Spotify, that will benefit Apple,” he said.

He said it’s a fight to the finish to be the leading streaming service.

“But this could easily move to 100 million, 200 million, 500 million subscribers even in a matter of years. So this is all about getting the land grab and the space before that potential spike happens.”

He said if a deal is announced there could be one hitch – the government might refuse to let it go through.