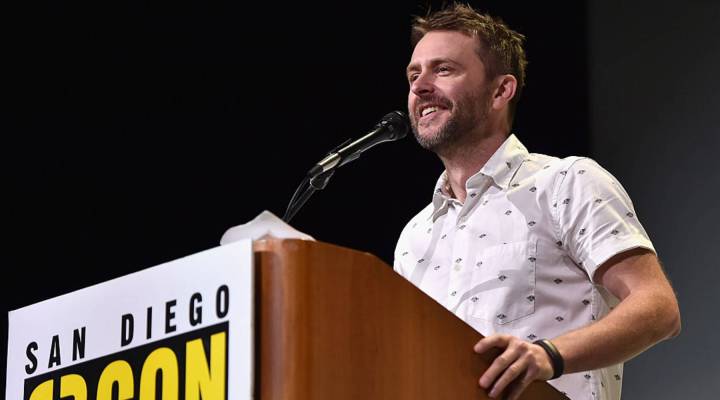 There’s a new game show on NBC called “The Wall.” The action centers around a huge pinball looking thing which resembles Japanese pachinko games and contestants have to answer trivia questions to win big money.

The show is co-executive produced by LeBron James and Chris Hardwick, who also hosts.

Founder of the Nerdist media empire, Hardwick is a podcaster, a host on Comedy Central and AMC and has a plethora side gigs. Lizzie O’Leary spoke with Hardwick about why he took yet another hosting job on “The Wall,” why he still feels like a 15-year-old kid sometimes and why the ubiquity of nerd culture isn’t a bad thing.

On whether or not he’s taken on too many jobs:

I don’t know if I have the perspective to make an educated analysis of that. I don’t think I’m spreading myself too thin… But I do know that I’m a fairly excellent time manager. I started trying to construct this career off of a bunch of part-time jobs. Sometimes when people see everything at once, they think, “Oh, you’re doing that all at the same time.” But not everything is live so it’s manageable.

This is ironic coming from someone who started a thing called Nerdist, [but] I mean I think the ubiquity of the word nerd now — it’s diluted its overall meaning. It doesn’t really bother me because a lot of people will complain — protonerds will complain —  “If you go to Comic Con now, it’s not just for comics anymore, there’s fringe people.” And I kind of feel like, hey, I think it’s great that it’s inclusive and I’m happy it’s more mainstream because we get a huge budget “Avengers” movie or we’ll get a “Deadpool” movie when that never would have happened before.

But I think what sometimes happens in nerd culture is that if you grow up feeling different or if you’re ostracized — and in my case I feel that I was very socially ostracized — then the reaction to that can be, well, I’m gonna build a thing that no one else can come into. My reaction was more “Oh, I don’t ever want anyone to feel ashamed about what they’re into or feel cut out or left out. So, I think if you watch anything that I do or listen to anything that I do, I believe that it’s all very inclusive.

I think you always feel you’re a version of yourself that’s somewhere between 13 and 16. The sort of, projection of our ego is this 15-year-old kid. You know, I’ve done stand-up for 20,000 people. But at a party sometimes, if I’m one-on-one, I feel very uncomfortable talking to people one-on-one. I still feel that, sort of, “I shouldn’t be here, I don’t belong here, everyone else knows something I don’t, they’re going to ask me to leave.” I mean, Paul McCartney was on the podcast and he talked about having imposter syndrome until quite recently… Yeah, so I still feel a lot of those things.