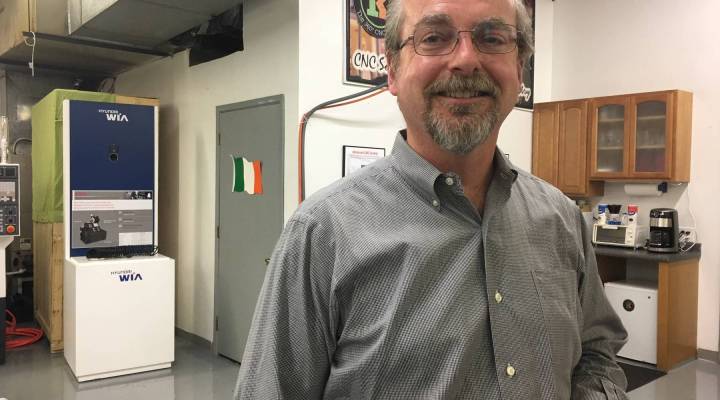 COPY
Greg Knox owns Knox Machinery in a northern suburb of Cincinnati. He believes Trump will be good for his business. Lewis Wallace/Marketplace

Greg Knox owns Knox Machinery in a northern suburb of Cincinnati. He believes Trump will be good for his business. Lewis Wallace/Marketplace
Listen Now

Greg Knox of Knox Machinery north of Cincinnati is looking forward to Jan. 20. For him, the biggest issues are taxes and trade: he sells highly automated machine tools, and he says over the years, a lot of his would-be customers, manufacturers, have suffered due to competition from Asia. He employs about 50 people, and says he’s counting on Trump to even the playing field for American manufacturers by strong-arming China on currency issues, and raising tariffs on imports. He’s most excited about the tax cuts: Trump has proposed cutting business taxes from 35 to 15 percent, which he says would allow him to hire more.

But just up I-75, in Dayton’s quiet south suburbs, Diana Rangel and her husband both run their own businesses as independent contractors: she’s a private Spanish tutor, he does roofing, and they’re both Mexican-American U.S. citizens. She voted for Clinton, partly because she’s really worried about Obamacare, which covers them and their kids. She makes more than $60 an hour now as an independent contractor, he makes more than $20, but if they lose health care, one of them might have to go work for someone, and she says the jobs they could get pay a lot less.

Diana Rangel outside her house in Centerville, Ohio. She’s worried about losing her healthcare, and about the changing racial climate.

She’s also scared about how the racial climate has changed: since the election her daughter has been harassed at school, and her husband has been asked about his immigration status on jobs.