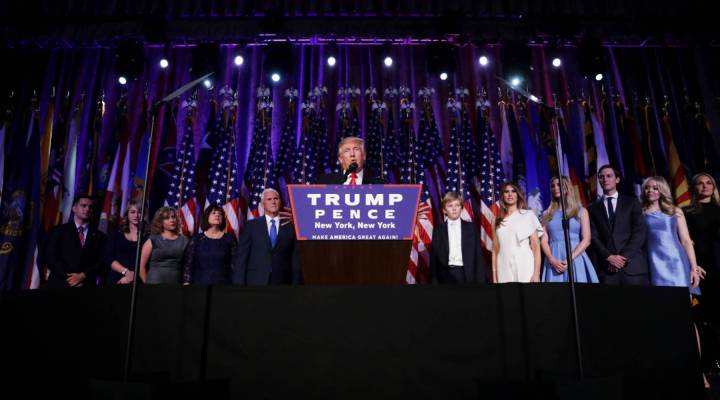 Now that the election is over, we can turn our attention to what President-elect Donald Trump might do when he takes office. We don’t have many details of his plans, but we do know he has some broad goals, like repealing the Affordable Care Act. Here’s a look a quick look at some of his policies.

We don’t know all that much about what education policy would look like under Donald Trump, but he has said he would either cut or drastically reduce the federal Department of Education. He also wants to end the Common Core standards, though that won’t be an easy task, given that they were created and adopted by states.
Trump has proposed a $20 billion school choice plan that would allow low-income families to send their kids to the school of their choice, including private schools. He also has a child care plan that would allow families that earn less than $500,000 a year to deduct the average cost of childcare from their taxable income.

On higher ed, he has said he wants the federal government to get out of the student loan business and bring private lenders back into the student aid program, expand income-based repayment on student loans and end the tax-exempt status for colleges with large endowments if they don’t spend more money on students.

A Trump presidency is a mixed bag for businesses: On top of the threat of a recession and a lot of confusion and uncertainty, we’ve seen some pretty desperate calls from business groups for unity and cooperation after this election is over. A group of 1,100 U.S. manufacturers wrote a letter to the president-elect expressing the need to reunite the country. Jay Timmons, head of the National Association of Manufacturers, said manufacturers are determined to work with Trump on issues like trade, tariffs and taxes.

Still, we’ve seen a lot of hand-wringing from powerful groups like the U.S. Chamber of Commerce over Trump’s trade protectionism and the suggestion that he’d raise tariffs and potentially renegotiate NAFTA. He also intends to abandon the Trans-Pacific Partnership.

On the other hand, the potential for lower corporate taxes and even corporate tax reform appears higher with a Republican Congress and president. Trump has proposed cutting the corporate tax rate to 15 percent, although analysts have pointed out that the losses could contribute huge amounts to the country’s deficit. For businesses in general, minimum wage is is an unknown; Trump has contradicted himself on whether they are too high or too low. Most recently, he has said he would raise the federal minimum wage to $10 an hour.

On health care, Trump has had a consistent message: that he will repeal and replace the Affordable Care Act, or Obamacare. Trump has said instead he would create a system more reliant on private Health Care Savings Accounts.

“We have to get rid of the lines around the states, artificial lines, where we stop insurance companies from coming in and competing,” he said at the debate in St. Louis, referring to his plan to let people shop for insurance plans across state lines. Trump also wants to allow people to fully deduct health insurance premiums from their taxes and import cheaper pharmaceutical drugs from overseas.