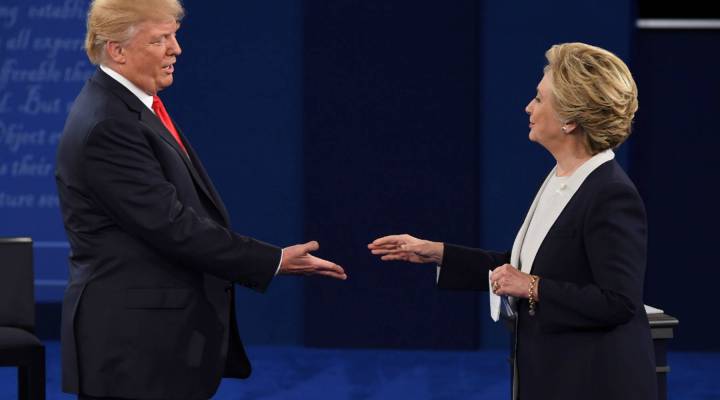 At Schlafly’s Bottleworks in a suburb of St. Louis, a mostly pro-Clinton crowd packed two bar rooms to watch the debate on Sunday night. It was mostly a Clinton crowd, and Clinton supporter Mary DeLeonardis said she wanted to hear the candidates discuss the economy.

“Well, I’m interested in what [Clinton] is saying about growing jobs,” she said. “What is her plan? I understand the ideas that are out there, but how are we really going to get jobs? What are we going to do about the minimum wage? I’d like to hear her talk about that.”

The second presidential debate only briefly touched on those issues, with much of the focus on the political fallout of a leaked tape featuring Donald Trump making lewd comments about women. Trump supporter Steve Ogden, a firefighter in St. Louis, said the debate wasn’t going to change anyone’s minds about the candidates.

Steve Ogden is a firefighter in St. Louis and plans to vote for Donald Trump.

The moderators did get to Trump’s tax issues, and he admitted he has been taking a roughly billion-dollar write off for his federal taxes. They also brought up the recent Wikileaks dump which includes what the group says are excerpts from Clinton Wall Street Speeches.

Cole Pierie, a student and restaurant server who was watching the debate, said he feels Clinton is corrupt, and originally planned to vote for Trump.

Cole Pierie watched the debate at a St. Louis area bar. He originally planned to vote for Trump, but has switched to Clinton.

And Trump is steadily losing even more favor with Republicans; there are several calls for the Republican National Committee to pull joint funding from his campaign.