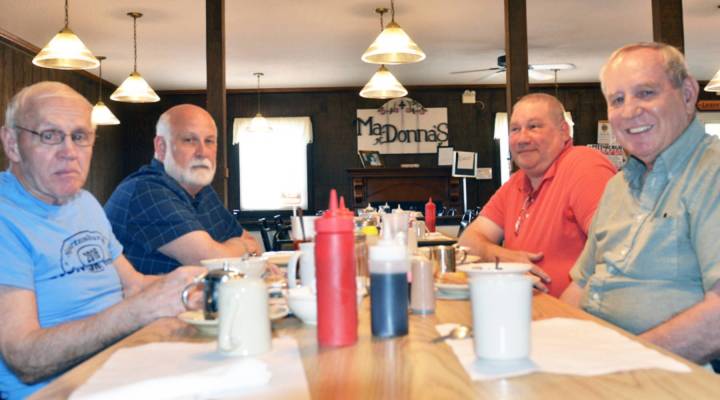 In a series called “The Big Promise,” Marketplace has been looking at how President Trump’s policies and the promises he made are playing out in a place where the economy is changing. In January, we introduced you to Union City in Erie County, Pennsylvania. It was once known as the “chair capital of the world” because manufacturers like Ethan Allen made furniture there. But when Ethan Allen and other manufacturers left, Union City changed. Marketplace host Kai Ryssdal went back to Union City to see how locals there are feeling about Trump’s first 100 days. At Ma-Donna’s Restaurant, a local gathering spot, Ryssdal talked with Gerald Eddie, Robert Glen, Norm Troyer, Keith Troyer and Mery Troyer over breakfast. He started by asking Robert Glen, a retired funeral director who doesn’t always agree with his friends’ political stances, how he feels about Trump. The following is an edited transcript of their conversation.

Robert Glen: I’m still giving him a chance. I listened to one of his people this morning on the news, and he’s going to give the big tax break but he’s still not going to show his own tax forms. For a person that hasn’t paid taxes in 18 years — I’m a little worried about him there.

Kai Ryssdal: Well, we don’t know what he’s paid and what he hasn’t paid.

Robert Glen: Well, that’s true. But for 18 years, he said that he hadn’t paid any taxes. The fact that he’s bankrupt companies and taken income out of families and companies — I’m just not so sure about him.

Ryssdal: Keith Troyer, let me ask you this question, and it comes from a poll that we did when we asked people how they were feeling about government in Washington. Three-quarters the people that we talked to said they think that Washington has forgotten about people like them. As you sit here in Union City, Pennsylvania, today what do you think?

Keith Troyer: When the president talked about draining the swamp, that made a lot of sense. Because you have Republicans and Democrats that are mired in money. The six richest counties are in or around Washington, D.C. Does that tell you anything?

Ryssdal: But are they paying attention to what you guys around this table want?

Keith Troyer: Oh, absolutely not. I’ve never had any of the candidates really talk to me. Trump was the first one to ever really connect. I voted for Trump mainly because of the Supreme Court justice, and now we have him. That was my main focus. I said, if we can get Trump in there, we have a chance to go outside of the “swamp.”

Kai Ryssdal, center, asked if Washington, D.C. is “paying attention to what you guys around this table want?” “Oh, absolutely not,” said Keith Troyer, second from right.

Ryssdal: So as you look at some of the other issues that are getting worked on in Washington — tax cuts, health care, immigration — are those a factor for you? Do you like what he’s doing?

Ryssdal: Are any of you five at this table being directly affected by what’s happening in Washington? I mean, you’re all of an age. You’re financially secure. Why did you vote the way you voted?

Gerald Eddie: Yeah. It affects me in what happens. I’m sort of with Keith there, especially on this on the Supreme Court appointments. I have grandchildren and I’d kind of like to see them have a good life. That’s kind of the way I’m looking at things right now.

Ryssdal: What are you looking for out of the rest of his term or two terms? I mean, 100 days is nothing in the span of a presidency.

Ryssdal: I’ll let you finish a mouthful of toast and ask you a question. All right. I had Caitlin, our producer, give you a call about six weeks or so ago to check in on how you were feeling and whether you were following the buzz around Donald Trump. And you said, as she related it to me, “You know, I watch the news every now and then. Seems OK to me.” How closely are you paying attention to all the things that are happening?

Robert Glen:  Not so much in Washington as I am globally. I will give Trump credit for what he’s done. But the real tale of a president is going to come the next four years after he’s elected, because that’s when a lot of the policies have come to fruition, or they’re going to start tearing him apart. I am disappointed in Congress an awful lot, because I think they are following party guidelines and they aren’t doing the will of the people, the ones that elected them. They seem to have turned their back on them and forgot them. They had a public forum here about a month ago or two months ago, and two of the congressman never bothered to show up. They wanted to take their questions over the phone rather than face the public. That disappointed me, and it showed the fact that they don’t care about the general public that much. They care about their own image and want to pat themselves on the back, so to speak. They just don’t care what the people think.

Ryssdal: The news in the last couple of days about NAFTA and how the president is angry with the Canadians over their practices, and he said he was going to pull out of NAFTA but then he wasn’t. What do you think of how he’s acting on his trade promises? Because, as we’ve acknowledged around this table this morning, he’s doing what he said he was going to do. How do you feel about him and America in the global economy?

Keith Troyer: As a conservative, I don’t think that’s a very good trade policy. And so, we’ll see in the future what happens. But I think probably Trump’s going to back away from NAFTA a little bit.

Ryssdal: Is that going to be all right with you if he pulls up the trade drawbridges with not only just NAFTA, but with China, and he’s talking about lots of stuff.

Keith Troyer: I mean, we’ll see what happens here in the future. I think he has our best interests at heart.

Ryssdal: All right, that phrase has been said a couple of times around the table this morning, that he “has got our best interest at heart.”

Keith Troyer: I think so.

Ryssdal: How do you know? Or are you just basing it on what he said?

Keith Troyer: Well, he said so many things that we aren’t sure of, but that’s the kind of guy he is. And so, we’re all letting this play out a little bit. But at the same time, he says enough things that make me think that he’s serious about being a blue-collar billionaire, if you want to call it that. He has a lot of good people are around him. They’re all wealthy, but they’re all people who don’t need the money. They’re doing this for our interests, I believe. As well as theirs, but I mean, they’re not in it for the money.

Ryssdal: When he says stuff like, “I’m going to grow the economy at 5 percent,” do you buy that?

Keith Troyer: If all these things come through, I believe that it will.

Ryssdal: One of the things he hasn’t been doing, actually, so much since he got elected — I mean, between election day and inauguration day, there was a whole lot of talk of “I’m going to stop companies from leaving, I’m going to keep jobs in his company.” He went he did the Carrier thing and the Ford thing and all that. He hasn’t done so much of that since he’s been elected. I wonder why you think that is.