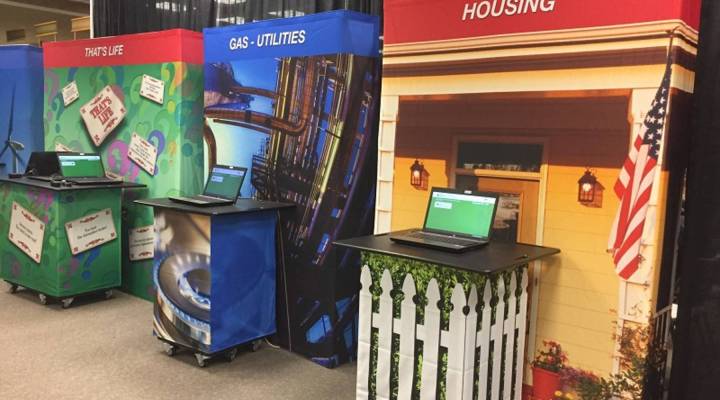 COPY
At the Finance Park, a financial literacy simulation in Baton Rouge, middle school students learn the basics of paying bills and taxes, and how to balance a monthly budget. Jesse Hardman

At the Finance Park, a financial literacy simulation in Baton Rouge, middle school students learn the basics of paying bills and taxes, and how to balance a monthly budget. Jesse Hardman
Listen Now

Tyrell Raby is a little nervous as he waits in line at a Baton Rouge bank.

“If you have a low credit score the bank won’t trust you that much,” he said.

Raby’s 13, and he’s actually at a fake bank, set up at a mall in Baton Rouge, with around 50 eighth-grade classmates from McKinley Middle School. He’s participating in a financial literacy course for middle schoolers.

Last May, Louisiana made financial literacy a mandatory topic in state public schools. The goal is to create a more money savvy generation in a place with some of the highest poverty rates in the country, and according to the Federal Deposit Insurance Corporation, the highest rate of unbanked residents.

As part of the McKinley school’s class exercise, Raby’s pretending to be 33, single, with no kids. “I don’t have that much money,” said Raby. “My monthly income is $1,913, I think.”

The students cycle through stations where they pay bills, and taxes. At the end of the day the goal is to balance the books.

Jamie Doming is project manager for Junior Achievement, the organization that designed today’s curriculum. She said reaching eighth graders is key to this process.
Louisiana’s high school dropout rate is around 25 percent.

“Your highest risk students  — they won’t even be there by ninth or 10th grade,” Doming said.

Which means they will be out in the real world, dealing with real financial issues. Like formal banking, something many of their parents struggle with according to Jan Moller, director of the Louisiana Budget Project, a nonprofit focusing on public policies that impact low- and middle-income residents.

“We know there are four times as many payday lending storefronts in Louisiana as there are McDonald’s restaurants,” Moller said.

Many Louisiana residents struggle with deep generational poverty, and compensate for that through payday lenders or simply deal in cash, Moller said. He said the state’s decision to prioritize financial literacy should help.

“We’re not talking about calculus here,” Moller said. “You don’t need to be a math major to balance your checkbook,” he said.

Which is exactly what eighth grader Tyrell Raby is working on back at the fake bank. He’s a bit overwhelmed by the 24 bills he’s accumulated in this exercise. Raby’s takeaway for the day?

“Learn the process of what you have to do to grow up,” Raby said.

That, and also, bills are scary.