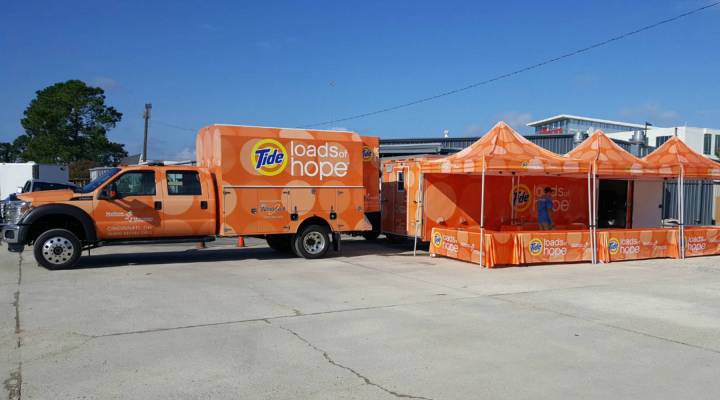 Tens of thousands of people have been displaced in southern Louisiana after devastating floods. They’re staying in shelters or with friends and family as they work to clean up their flooded homes. People need the basics — water, food and cleaning supplies — and some companies see that need as an opportunity.

In Denham Springs, just east of Baton Rouge, Chris Ilgenfritz is dragging all of the wet furniture out of his house and tearing out the drywall. It’s hard work, and he’s hungry. He said Exxon handed out sandwiches. Though they weren’t gourmet, he was grateful.

“They were giving out pounds of ham and bread…but you know, it’s better than nothing!” he said.

Debris and water-logged furniture is piled high along the streets near Denham Springs, La.

Streets are piled high with trash and debris. Many businesses are closed down. Electricity is still out in a lot of places.

Along with charities, private companies are streaming into town, to help out — but also because it’s a PR opportunity.

Tide sent a truck with free detergent. Duracell is giving out batteries. Clorox is giving out bleach. Airbnb is letting people use the online room-booking site for free.

At the same time, people in some areas waited for days to get food and water through state agencies.

“Companies can move very quickly — make decisions, give out their products that they have available — very fast. Governments are just going to be much more methodical,” he said.

Retired Lt. General Russel Honore has seen it all before. He oversaw cleanup after Hurricane Katrina. Now, he’s volunteering at a movie studio-turned-shelter where people are coming for help, and where some big-name companies are giving away supplies.

“There’s a good side and people might say there’s an ugly side to it,” he said. “But for every one that they give, we are buying thousands. Just remember that. For what they might give us in terms of a battery, the government is buying truckloads of them.”

These freebies aren’t easy to count on though. The trucks show up at shelters and relief stations randomly. But with extreme weather seemingly increasing, you’re more likely to see the Tide truck before the National Guard.