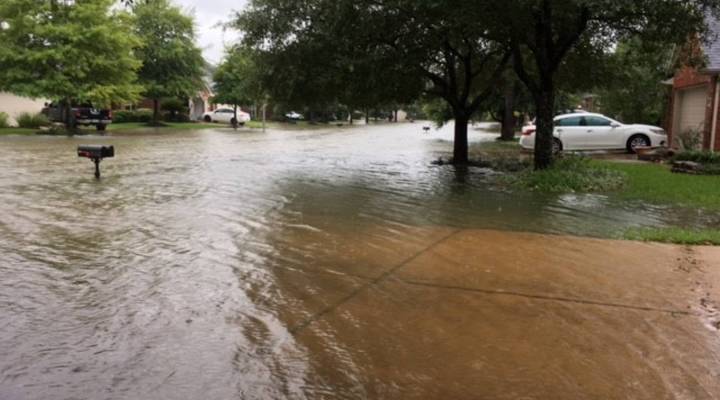 Unprecedented amounts of rain have been flooding Harris County, Texas, for days after Hurricane Harvey hit the Gulf Coast. Very few homeowners have flood insurance because they do not live in designated flood plains, and they’re coping with the fear of not knowing what will happen to their homes — and how to deal with crisis if it does arrive.

Matt Fannin lives in Baton Rouge, Louisiana. This time last year, his city was flooded, and it’s still recovering. Marcy Matyas is in Cypress, Texas, just northwest of Houston. She was cooped up in her house for four days watching the water rise to within feet of her front door.

The two homeowners talked to each other on Tuesday about what it’s like to deal with the uncertainty that comes with natural disasters. Below is a transcript of their conversation:

Marcy Matyas: I mean, the hurricane came in Friday evening and the rain — that’s when the rain started. Probably 11 o’clock last night [Monday] it was, you know, 2 feet or so from my front door. We were concerned. We don’t have flood insurance. We don’t live in a flood plain and certainly never have seen anything like this in our area before.

Matt Fannin: I experienced last year the August flooding in the Baton Rouge area. We had water come right up to us, but we did not flood.

Matyas: Not having flood insurance and thinking you don’t need it is — it just kind of puts you in a panic situation when something like this happens. It’s very stressful. Even though I’m telling myself over and over again, “It’s just stuff. It doesn’t matter.” We still spent all of yesterday moving everything upstairs in our house or putting it up on on bricks. My husband even went so far as to put his car, which is in the garage, up on risers. I started searching “What do you do if you are flooded?” One of the first things I read was to start taking photos of everything in your house so that you have proof that this is what my house looked like, and you’re going to try to get it back to that if necessary. So that’s how I spent my day, just researching that and checking water levels. We had lots of markers out front so we could see where it was coming.

Fannin: I can tell you that once you go through one of those flood events, like last year, everyone becomes on edge when you hear any type of heavy rainfall coming.

Matyas: I mean, I would imagine that it’s a little PTSD-like. You flashback to the fear, right?

Fannin: Yes. And that fear occurs regardless of whether you actually had flooding or not. Because when you have friends that flooded and it’s all around you, you think, “Well, it might be me this time.”

Matyas: I’m curious now that you’ve lived through this and survived it, did you buy flood insurance?

Fannin: My wife and I actually have been discussing that. One of the things we did check out [was] pricing, and if you’re not in an area that requires flood insurance, the cost is much lower. And so it’s low cost for peace of mind, I can say that for sure.

Matyas: I mean, on my street, down at one end, there have been people who’ve got water in their house. Does that make a difference?

Fannin: I mean, I think in the long term it really comes down to whether or not the maps that define whether or not you’re in a 100-year flood plain or not change. I was talking to my wife. She had another friend, and their first floor had gotten flooded but their second floor had not, and so they were living out of their second floor, you know, a year now past the flood. And they still hadn’t gotten their first floor fixed. And so that’s one of the challenges, is having to work with FEMA to get the damage assessed and processed, and then that’s when insurance may or may not kick in.

Fannin: I know that those of us here in Louisiana that have gone through our flooding event last year, and other recent disasters, we know where you’re at and we’re praying for you. And I know that many of us are looking for the opportunity to help.

Matyas: Thank you for that.