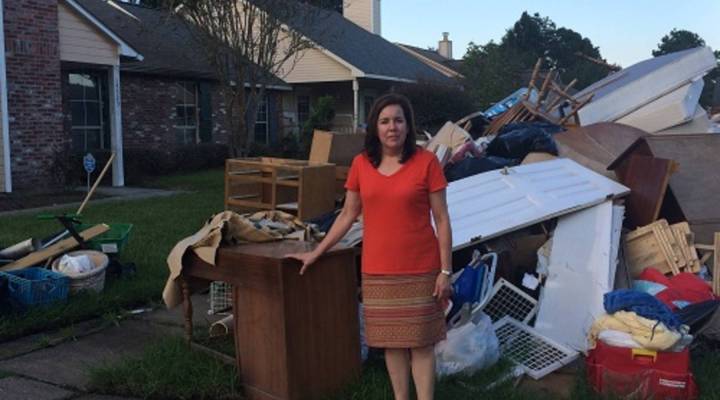 COPY
Patti Clement in front of her home in Baton Rouge, where she has lived for 14 years. Nina Feldman

Patti Clement in front of her home in Baton Rouge, where she has lived for 14 years. Nina Feldman
Listen Now

The recent flooding in and around Baton Rouge, Louisiana displaced over 120,000 people from their homes. Many people ended up crashing with family or friends, not staying in shelters. But relief organizations still direct supplies and donations to those shelters. So a group called Together Baton Rouge had another idea that would get people what they need, when they need it, and help disaster relief keep up with the times.

Patti Clement lost her car, her house, and almost everything inside it during the August flooding.

“The whole house is totally gutted and all of my belongings are right outside on the curb,” she said, gesturing to the enormous pile of furniture and clothing piled high in front of her house.

All the homes on her street had their own version of the same pile.The water in Clement’s subdivision rose so fast, she didn’t have time to take much with her. She’s staying with her brother now.

Clement may be staying with family, but she still needs help. Broderick Bagert, the lead organizer for Together Baton Rouge, said the systems we use after disasters are old- fashioned. We rely on armies of volunteers to sort donations in warehouses and fleets of trucks to deliver them.

“I mean it is insane that we do that,” he said.

Together Baton Rouge is an advocacy network made of mostly religious groups. It doesn’t have disaster relief experience, but it has a big database. It used that database to find out what people needed after the floods. Then, phone bankers would order it for them online. But even that was too slow. Flood victims weren’t staying put, and volunteers were making awkward decisions for people.

“Somebody says they need men’s pants size 34. Well what pants?” he said.

So, they started sending people Amazon gift cards. Bagert said he’d rather support local  businesses, but in times of crisis, we should use the systems we have, designed to get people what they need, fast.

Patti Clement used her card on things she wouldn’t have found in a donation box.

“I had skin cancer about a year ago, and I was using a special sunscreen, so I used the gift card to cover that,” she said.

Plus, she said, shopping for herself gave her a sense of control.

“After having strangers take every single belonging out of my home, this allowed me to to prioritize the items that I really needed to get back to basic daily living,” she said.