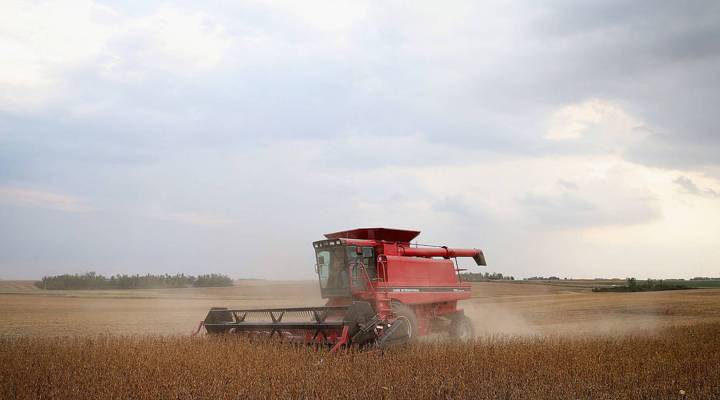 COPY
Soybeans are harvested on a field near Worthington, Minnesota. Scott Olson/Getty Images

When farmers in the small farming town of Hallock, Minnesota have a bad year, as they have a few years in a row now, pretty much all the businesses in town suffer, including the grocery store.

A few years ago, wheat, a big crop in these parts, sold for as much as $13 a bushel. Now it’s closer to $4. Corn and soybeans have also tumbled.

Those changes have spelled trouble for Theresia Gillie, who’s been farming for 30 years. She’s one of the locals spending less money at the Farmer’s Store.

“There’s more hamburger and a little less steak,” she said.

Last year, Gillie and her husband lost $250,000 on their farm as crop prices plunged. They had to restructure several loans. Gillie said their time frame for paying off debts is now much longer.

“Walking out of the debt I had planned for another three or four years from now is now 10 years down the road,” said Gillie. “And it hurts.”

Things look a bit better this year for the Gillies with some price recovery in soybeans, which they farm in addition to wheat. But Theresia Gillie said they probably still won’t turn a profit.

“This is a recession, if you’re making a general economy comparison,” said Scott Irwin, an agriculture economist at the University of Illinois.

He said some Midwestern farmers might break even this year after a big drop in income last year. But those with poor yields could still face steep losses.

It’s bad. But Irwin said it’s not as bad as the farm crisis of the 1980s, when farmers had to sell off land at fire sale prices.

“At that point in time we had a solvency crisis, meaning that the double whammy of declining crop prices and skyrocketing interest rates due to the Federal Reserve change in policy in 1979 really put agriculture in a vice,” he said.

Most farms use debt to fund their operations, and the Fed’s decision to raise interest rates to fight inflation made loans more expensive for everyone.

Irwin said today it’s more of a profit margin and cash flow crisis. And farmers are coming off historically high crop prices, so many at least have savings to spend down.

That said, some might decide to get out of farming altogether. Attracting a new generation to farming was already tough even before the downturn. Now it may prove even more challenging.

Theresia Gillie and her husband had hoped their son Bryce might take over their farm. He’s 25 and has an agronomy degree.

But the big drop in crop prices has spooked him about farming. “It’s a challenge that I even question if I’m willing to take on,” Bryce Gillie said.

And even if he does choose to stick with farming, the financial cushion his parents thought they’d be able to provide is now out of reach.