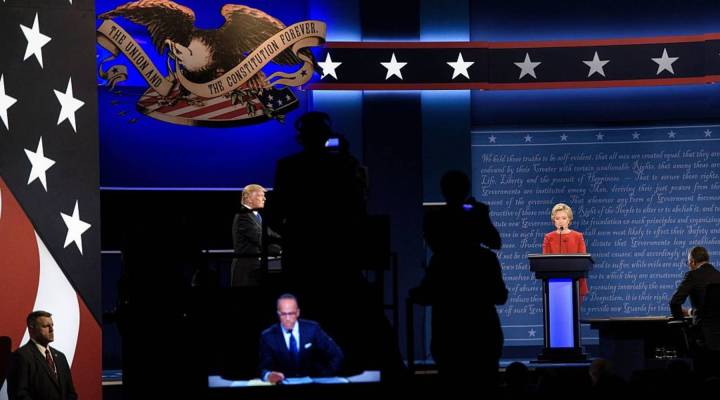 There are many ways to measure the tipping points in this election. Polls, of course and social media buzz too.

Also, market response to the political sparring of the moment.

The moment in question for us today was the first Clinton vs. Trump debate and what markets were saying about it, as it was happening.

Justin Wolfers is a professor of economics and public policy at the University of Michigan and he’s out with a new paper titled “What do financial markets think of the 2016 election?”

On what he was watching on the night of the first presidential debate:

I’ve got one screen watching the debate, another watching the prediction markets where people are betting on who’s going to win the race, and yet another what’s happening in overnight trading — watching the S&P go up and down as the candidates are speaking.

On what he saw:

Basically, every time you saw Hillary land a blow or Trump muffle an answer, you saw the stocks start to rise. And so, through the course of the evening, between 9 [PM Eastern Time] and 11 [PM Eastern Time], they rose by nearly three-quarters of a percentage point … It absolutely spiked, and it wasn’t just a two-hour spike — we were looking minute by minute. And, for instance, when Hillary took Trump to town on about not paying taxes, which was a moment that scored well with most audiences, it also scored well with the stock market. The S&P started to rally yet again during each of those little phases as well.

On the historical context:

It’s usually the case that if you look at what happens when there’s good news for Republicans — it’s more likely we’ll get a Republican president — usually Wall Street cheers. It might be that they prefer Republicans as economic managers or it might be they think they’re going to get a tax break from Republicans, I’m not sure what it is. But we’ve looked at this for pretty much every election since 1880, and to see Wall Street cheer when a Republican becomes less likely to win — that’s extremely unusual. And then the size of the movements this time is just much, much larger than they typically are. Usually, Wall Street doesn’t care that much about elections. This time, they think it’s a really big deal.

On the correlation vs. causation argument:

This is where it’s really important: we’re analyzing a period where basically nothing else was going on. And it’s a very large movement — extremely large — for 9 o’clock on a Monday night, and the fact that the markets rose, pretty much in parallel with Hillary’s chances and the fact that the peso rose at the same time, pretty much tells you this was a political shock, it wasn’t something else.

On if this could be mistaken for liberal academic speech:

That’s a totally reasonable argument if this were an argument from a lefty academic. What I’m doing here, Kai — I’m just the interpreter. It’s the markets saying this. I am just telling you: Wall Street rallies when Clinton becomes more likely to be president. So this isn’t what my liberal friends are saying, this is what my investor friends on Wall Street are doing.