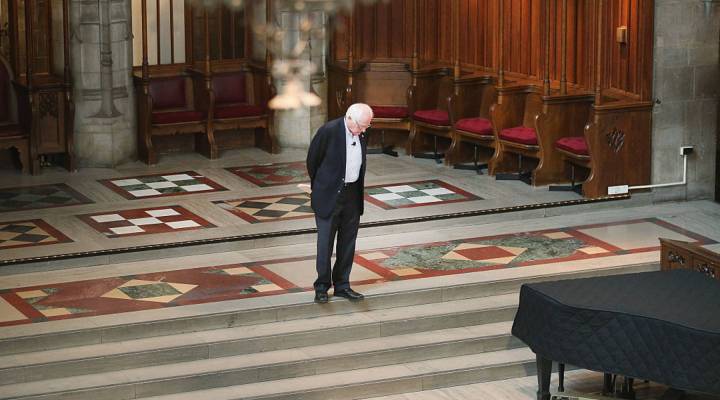 COPY
Democratic presidential candidate Senator Bernie Sanders waits to be introduced at an event sponsored by Institute of Politics at the University of Chicago on September 28, 2015 in Chicago, Illinois.  Scott Olson/Getty Images

Democratic presidential candidate Senator Bernie Sanders waits to be introduced at an event sponsored by Institute of Politics at the University of Chicago on September 28, 2015 in Chicago, Illinois.  Scott Olson/Getty Images
Listen Now

I called it a political fever dream yesterday — the idea that Donald Trump and Bernie Sanders were eventually gonna wind up on a debate stage.

What do ya know? I was right.

Here’s the press release out of the Trump camp today:

Based on the fact that the Democratic nominating process is totally rigged and Crooked Hillary Clinton and Deborah Wasserman Schultz will not allow Bernie Sanders to win, and now that I am the presumptive Republican nominee, it seems inappropriate that I would debate the second place finisher. Likewise, the networks want to make a killing on these events and are not proving to be too generous to charitable causes, in this case, women’s health issues. Therefore, as much as I want to debate Bernie Sanders — and it would be an easy payday — I will wait to debate the first place finisher in the Democratic Party, probably Crooked Hillary Clinton, or whoever it may be.