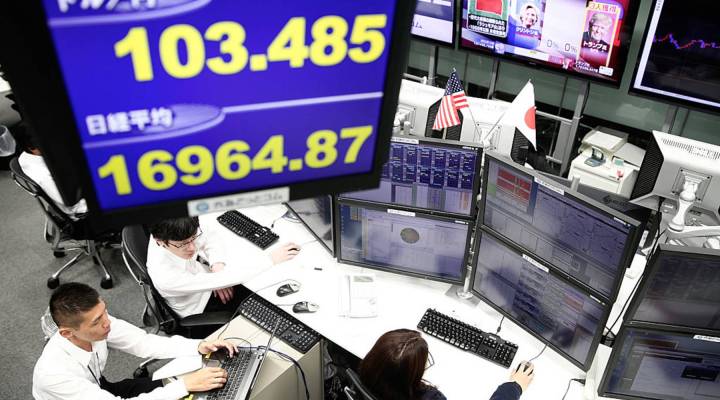 Investors did not respond well to Trump’s victories in various states — not surprising given that analysts had said Hillary Clinton is seen as a safer candidate with steadier hands, while a Trump victory would spur uncertainty. It’s a reaction we saw throughout the contentious election season.

“Usually, Wall Street doesn’t care that much about elections. This time, they think it’s a really big deal,” Justin Wolfers,  a professor of economics and public policy at the University of Michigan, told us last month. Wolfers tracked the markets’ fluctuation during the first debate.

Sovereign bonds and gold shot higher Tuesday evening, while the Mexican peso went into near free-fall as investors faced the real possibility of a surprise win by Trump.

The peso has become a touchstone for sentiment on the election as Trump’s trade policies are seen as damaging to Mexico’s export-heavy economy. Its value plunged more than 13 percent against the dollar, the biggest daily move in two decades.

But Asian stocks skidded, with MSCI’s broadest index of Asia-Pacific stocks outside Japan down 3.4 percent and the Nikkei off 6 percent. U.S. stock futures dived 5 percent, worse than the carnage following the British vote to leave the European Union in June that wiped trillions of dollars of value off world markets.

“With Brexit we had one bad day but this is different,” Donald Selkin, chief market strategist at National Securities, told Reuters.

This kind of anxiety had investors hedging ahead of the election, driving up stock options as late as last week.

And, while this may seem to signal that it’s time to panic about your own finances — don’t.